"Paper Pete" is the twenty-second episode in the third season of Adventure Time. It's the seventy-fourth episode overall.

Finn tries to resolve a secret library war between the Pagelings and the Moldos.

Finn and Jake are moving through the library that belongs to the Turtle Princess while heaving a ludicrously large book on top of their backs. Upon setting it on a table, the book is revealed to be an unabridged history of Rainicorns titled Rainicornicopia. Finn quickly becomes bored so goes off and seeks out something fun to do, like another adventure, but Jake dismisses this as nothing more than Finn playing "make-believe." Frustrated by Jake's dismissal of him, Finn goes off into a random aisle and discovers the Pagelings and their leader, Paper Pete. Pete tells Finn that he and his secret band of blank pages have been defending the entirety of the library from the Moldo horde for many moons and that their recent attacks have become more fervent (using a book called "Teddy Bear Joke Book" as an example). Pete concludes by stating that they will mount a "full-scale assault on the library tonight." Finn, in an attempt to show Jake the Pagelings, pulls the book from right under Jake's nose and drags it hastily to where the Pagelings were, but some books fall and obscure them from view, leading to more aggravation on Jake's part and he accentuates his belief that Finn is continuing to make up adventures.

After Jake leaves, Finn asks the Pagelings why they did not show themselves to Jake. They respond by pointing out that they are a secret group, and wish to reveal themselves only to Finn, whom they refer to as a "noble giant." Finn convinces the Pagelings to come show themselves to Jake by stating that he, too, is a great giant that will aid them in their battle. Upon arrival at Jake's table, Jake puts his head down on the book and thickens his arms so that he can cover up the sides of his face from distraction from Finn; the flower dance from the Pagelings does nothing but annoy Jake further from believing Finn. Afterward, the Pagelings and Finn return to the spot where Finn first met them, but to the horror of the Pagelings, a "reconnaissance squad" of Moldo have arrived and already began eating at the pages of some books. The Pagelings unsheathe their paper swords and charge into battle with the Moldos, but Finn manages to win the battle for the former by yawning on all of them. While praising Finn, Pete mentions how the bites of the Moldo sting "like the dickens," which soon leads to Finn hatching a new conceit.

The two surreptitiously follow the Moldos to their secret lair, where Finn and Pete enter and after Finn makes random noises, are surrounded by Moldos. They are initially belligerent, but Finn manages to calm the whole Moldo clan down by stating that he has come to join them, much to Pete's surprise, who is shortly thereafter reminded by Finn that he should trust him. After Finn calls out their democratically elected leader, he snatches up Mildwin and many other Moldos into his arms, runs through the library, and, upon arriving at where Jake was, throws the Moldos at him.

Jake soon notices only their biting of his fur and flesh and fails to remove them from his person or see them, which was Finn's original intention of throwing them in the first place. The Moldos will not remove themselves, as they find Jake tasty. Realizing what he had done, Finn frantically attempts to "find an answer in the library," which he quickly sees to be the books. However, instead of finding an appropriate book to read, he instead grabs a book and begins whacking Jake, which does nothing but pain Jake more.

In despair, Finn ceases whacking Jake but then drops it in response to the appearance of a Moldo chewing on his shirt, who comments on it as being the "tastiest thing. Ever." Suddenly Finn takes off his shirt (much to the embarrassment of Turtle Princess) and presents it to Mildwin as a peace offering from the Pagelings. The Moldos on Jake crawl to Finn's shirt and Mildwin responds by stating that the shirt should feed many generations of his people. Finn then says that if the shirt runs out, he will give them his pants. Jake soon removes the Moldos from his eyes, and, despite being shown the Pagelings and Moldos (thus proving Finn's original claims throughout the episode), states that he cares not for them, as he is in pain.

The two leave the library, and Jake confesses to being stuck on a single paragraph in the Rainicornicopia for 11 minutes. When asked about learning the history of his potential mixed-species children with Lady Rainicorn, Jake says he will "fake it." Finn comments that there are sun people to fight; Jake, after having his question confirmed by Finn that Finn is indeed making stuff up now, decides to cooperate and runs off into the distance with him. 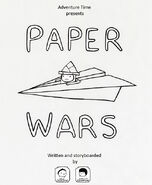 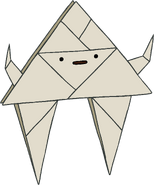 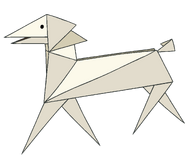 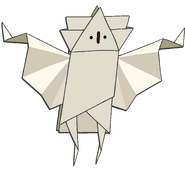 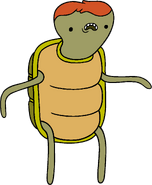 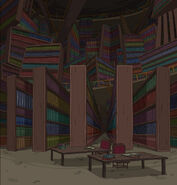 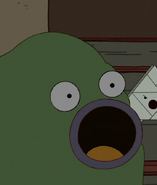 Close-up of a Moldo

Finn and Paper Pete in the Moldos' Secret Lair 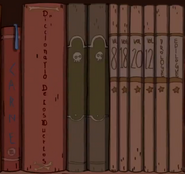 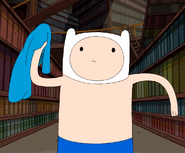 Finn taking off his shirt

Turtle Princess blushing at the sight of the shirtless Finn

Finn and Jake running towards the horizon