Secret Guardian of the books

Pete Browngardt
Paper Pete was one of the main characters in the episode "Paper Pete," and is voiced by Pete Browngardt. He is the one to tell Finn about the attacking Moldos. He tells Finn that he can call him "PP," but then Finn just says that he'll call him Pete. He and the other Pagelings revealed themselves to him because he felt their plight when he saw the damaged books. Paper Pete is the leader of the Pagelings and has had problems with the Moldos and their leader, Mildwin. Instead of defeating them, he and Finn resolved their conflicts, which was their eating the library books, by giving them his shirt to eat.

Paper Pete is a folded triangular paper origami. His body is made up of 5 "sections" in his normal form, forming one triangle. His face is in the middle triangle, and the top triangle is made up of 3 of its own sections. The left triangle on his body slightly over-laps the right triangle. His arms and legs are also triangular, except they are narrow.

Paper Pete had three transformations. His face is not visible in these forms, yet he can still see. His first transformation was a blank book page, the second was a flower, and the third was a paper airplane. He looks like a regular piece of paper as a book page. As a flower, he had 4 petals, a skinny stalk, and leaves shaped like pentagons. He looks like a basic paper airplane in his last form, with no complicated design.

He has a paper origami sword for battle. While it wouldn't be a lethal weapon, it seems to be effective against the Moldos for some reason. It even resisted the Moldos staffs when the Pagelings were pushing them away with them.

Paper Pete is a brave, polite, and chivalrous leader of the Pagelings. He speaks in a formal manner. It seems that he is only against evil, as shown when he befriended the Moldo and Mildwin, despite their past relationship.

He can unfold himself and become the front pages of books. He can turn himself into different paper origami forms by will. Only one of the transformations he made gave him a new ability, which was flight, when he folded into a paper airplane. He also wields a sword at all times, which aided him in battle with a group of Moldos 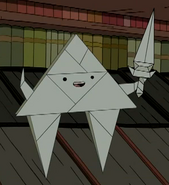 Paper Pete to the far left