Start a Wiki
watch 01:21
The Loop (TV)
Do you like this video?
PHIL FACE (also referred to as the Rynda Mandala[1]), is a running gag facial expression often used in Adventure Time. It is meant to resemble the face of Adventure Time lead character designer Phil Rynda. Pen Ward has stated that if you tell Phil about "anything" he will get a super excited face that this is based off of. Along with the Snail, it is an Easter egg. It is occasionally drawn into the show as an inside joke.[2] Pen Ward stated on his Spring that there is a Phil Face Princess;[3] however, no such character ever appeared onscreen.

The expression is composed of an open mouth curled up at the corners, wide eyes, and highly arched eyebrows. Stubble and blue, round glasses, though not mandatory, enhance the overall PHIL FACE experience.

Appearances as a character

Phil is a recurring character based on Phil Rynda who originally appeared as a "Pajama Ninja" in "City of Thieves." He is a humanoid with a Phil-like face, although he usually doesn't make the actual PHIL FACE expression. He is seen in the following episodes: 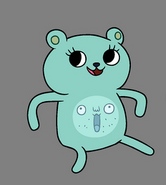 Face on a newspaper from "Slow Love"

Naked Phil in "Blood Under the Skin" 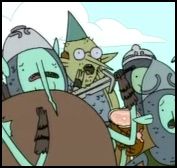 The PHIL FACE goblin in "The Silent King"

Another Phil face to open the nightosphere

Mrs. Cow on the "Memory of a Memory" tite card 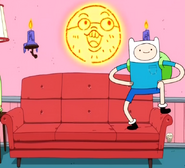 Phil Face on PB and Finn's pranking machine in "Too Young"

Phil sitting next to LSP in "Wizard Battle"

About to whisper a plan to Jake in "Her Parents"

PHIL FACE in the background under the word "WORM" 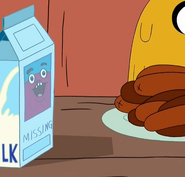 Retrieved from "https://adventuretime.fandom.com/wiki/PHIL_FACE?oldid=831593"
Community content is available under CC-BY-SA unless otherwise noted.