Graham Falk
"Orgalorg" is the fortieth episode in the sixth season of Adventure Time. It's the one hundred and ninety-sixth episode overall.[2]

After a walrus race accident, Gunter has strange visions.[3]

The episode begins with the Ice King opening his refrigerator to retrieve a slice of cheesecake. Inside, he finds the cheesecake surrounded by Gunter and a group of giggling penguins who have wedged a grenade labeled "Sleepin' Gas" into it. Apparently not noticing the grenade, he picks up Gunter (telling the Penguin that he's "hanging with a bad crowd") and the cheesecake and leaves the room to eat. The Ice King eats almost all of the cheesecake except the portion containing the grenade and then decides he'll save the rest for another time, but before he can put it away Gunter shoves the grenade down his throat.

The grenade's gas renders the Ice King unconscious, and Gunter informs the other penguins. They carry the sleeping Ice King to his bed and proceed to throw a party in his castle. They stage a walrus race and a croupier takes bets on which walrus will win. Lumpy Space Princess arrives, and bets five fish on Walrus #5. When #5 begins to lag behind, LSP becomes irritated and hits it with a hockey stick, prompting it to attack her. She yells for Gunter to help her, and Gunter runs to the Walrus track and grabs her from the walrus' jaws. Walrus #5 grabs Gunter and hurls him into a wall, where he hits an icicle and loses consciousness.

When Gunter wakes up, his head has been split open and his pulsating green brain is clearly visible. Scared of his bizarre appearance, the other penguins and LSP scream and leave the Ice Kingdom. Alone, Gunter has visions of the Catalyst Comet and the silhouette of what appears to be Abraham Lincoln. He goes into the Ice King's woodworking area and uses a band saw to carve small wooden cutouts of various deities, among them are Abraham Lincoln and Orgalorg. He lines the cutouts up on the floor with Lincoln closest to him and Orgalorg furthest. He seems to concentrate his mind on them, emitting a yellow-green beam of light from his flippers that connects to his exposed brain. Another beam of light appears on the farthest cutout from Gunter, and travels to each cutout in succession until reaches Gunter's brain as well. A third beam of light emits from Gunter's brain and travels out of Earth's atmosphere to the Swampy Planet.

An alien living on the Swampy Planet runs to an alien child accompanied by its parents and shouts that they have to kneel because Orgalorg is signaling them. The alien child asks who Orgalorg is, and its parents state that they thought Orgalorg was a fictional character in a myth their own parents told them. The alien child's grandparents arrive just in time to hear this, and the alien grandmother insists that Orgalorg is real. She claims that in the distant past Orgalorg was an extremely powerful cosmic entity who ruled the solar system as a "breaker of worlds." When an incarnation of the Catalyst Comet appeared in Orgalorg's time, Orgalorg sought to absorb it and gain its power. Abraham Lincoln did not want this to happen and sent Grob Gob Glob Grod to strike him down with The Flaming Sword Of Grob Gob Glob Grod. Grob Gob Glob Grod incapacitated Orgalorg with his sword, and Orgalorg fell to Earth where he was "compressed into a more powerless form." As the grandmother is telling the last line of the story, Orgalorg can be seen gradually transforming into Gunter as he falls to Earth. A few moments later, an image of Gunter is projected into the sky above the unknown planet.

Back on Earth, Gunter seems to snap out of the trance that caused him to build the wooden cutouts and signal the unknown planet, and the beam of light emitting from his brain disappears. He grabs an icicle and smashes the cutouts. After they are destroyed, he is shown remembering various moments of himself living throughout human history after falling to Earth.

The Ice King wakes up and chides Gunter for breaking wood on his floor. Noticing Gunter's exposed brain, he pushes it back into his head and covers it with a wrapping of pink cloth. Ice King holds up a mirror to show Gunter how he looks, and in Gunter's mind his reflection appears to morph into Orgalorg. 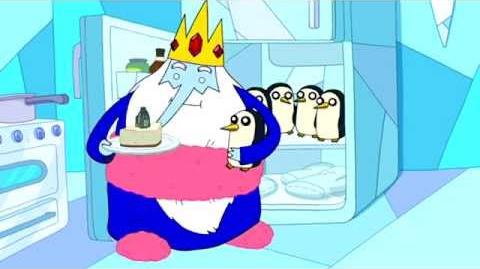 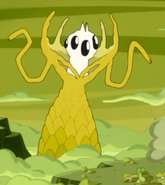