"Hide and Seek"
Oozers are zombie-like creatures that make their first appearance in "Simon & Marcy," during the post-Mushroom War days. One appears in the Soupery, and two others appear in the Clambulance. Oozers are presumably attracted to loud noises, because when Simon knocks over the Clambulance, it makes a loud noise, attracting all the monsters to attack him and Marceline. Simon freezes them when he puts on his crown and creates a snow storm. They later appear in "James," where a large group of them are found in a pit in the Desert of Wonder (which is, possibly, the wreckage of the town Simon and Marcy lived in) where they attack Finn, Jake, Princess Bubblegum, and James. In the end, James sacrifices himself so the others can escape, is turned into one of them, and is shown leading the others out of the pit.

They are all various shades of green, brown, and yellow, and blue, and have various numbers of holes in their head for their eyes and mouths, out of which oozes a glowing green substance. The ooze that comes out of them is very corrosive as it's seen melting through the glass window of Princess Bubblegum's tripod lander in the episode "James." Princess Bubblegum also claimed that she detected large amounts of radiation in them. The ooze is likely the same substance seen in "The Vault" (when Shoko fell into the green ooze river), in "Mortal Folly" and "Mortal Recoil" (when Princess Bubblegum fell into the Lich's green ooze), and also in "Jake the Dog". 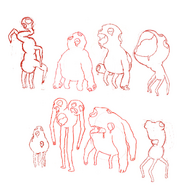