"On the Lam" is the forty-first episode in the sixth season of Adventure Time. It is the one hundred and ninety-seventh episode overall.

Finn's father, Marntin the Human, fights for freedom on a new planet.[2]

After escaping from a chain gang of captured rebels with a koala rebel in tow, Martin is brought into the koala camp and treated with kindness and generosity by the fuzzy animals that are happy to have their ally back.

They offer the hungry Martin a bowl of milk from their giant moth, but Martin turns down the meal, instead hatching a plan that takes advantage of the koala's overwhelming hunger and need for medical assistance. He names himself the new rebel leader and proclaims that he will ride the Space Moth into the city with the koala hanging on his neck and raid it for food and supplies.

When he arrives in town, the first thing he does is sell the moth for a bag of gold. He then goes to a local pub to get a drink but a couple of alien guards come in and sticks a 'Wanted' sign with his face and the koala on it. The bartender notices this and reports it to the guards in the bar. Martin makes a run for it.

Martin makes a run for it and hides in a barrel, where he tells Martin 2 that he's running out of options and will need to abandon him. He throws Martin 2 out of the barrel to distract the surrounding officers, and when Martin learns that the koala is the officers’ primary target, he's totally relieved.

It turns out Martin 2 is really old and the leader of the rebels. Instead, Martin uses this opening to make his way to the king's treasure room, which is full of gold and jewels. He's overcome with pure glee when he sees the room in all its glory, and immediately starts hoarding as much as possible, telling himself that it's what Martin 2 would want him to do. And when he finds the moth in the treasure room, he believes that it's a gift from the Globs for his great acts of valor.

He breaks out of the King's treasure room and flies the moth to space with several pieces of gold in its mouth. 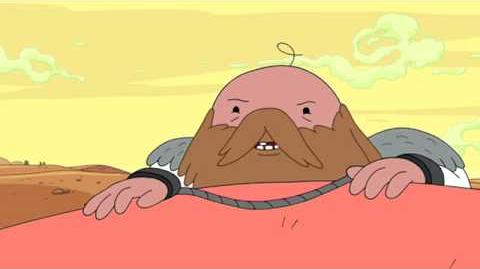 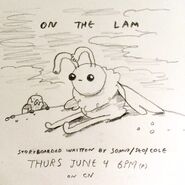 On the Lam promo by writer and storyboard artist Seo Kim 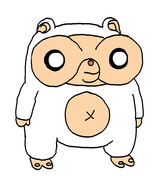 On the Lam storyboard panel