Steve Little
The Old Lady is a character who appears in "His Hero." She is first seen being menaced by the Swamp Giant before being rescued by Finn. When she hears that Finn and Jake are trying to practice non-violence because of their hero Billy, she advises him to keep using violence to stop evil and not to listen to the advice of old people (despite being old herself). Then she starts break dancing. Later, Jake carries her on his butt to meet Billy in his secret cave. When Finn and Jake inform Billy that they saved an old lady with violence, he at first began lecturing them saying the Old Lady was "probably dead." When they show Billy that she was still alive and well, a void in his being is filled by seeing that an ecstatic, dancing, old lady has been saved by violent heroism. The Old Lady is last seen perching on Billy's shoulder as Finn and Jake run outside.

She also appears in "The Lich" where she was seen in Finn's dream kissing Billy. She's referred to as Billy's "Lady," meaning they could possibly be in a relationship. But it is not known, since it was a dream. Since Finn's dream seemed to be an omen of what happened to Billy, it is possible the old lady was present when he found the Enchiridion or had been possessed by the Snail Lich. If it happened, it is unknown what became of her, though the vision shows her in the mouth of, or being eaten by the Bear.

Old Lady looks like a short green person wearing a red robe of some sort with a hood. Her head combined with the hood makes it look pear shaped, it isn't clear whether her head or the hood causes this. Around her neck there is a thin pink band. She has small white eyes. 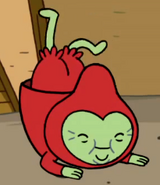 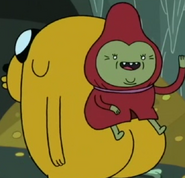 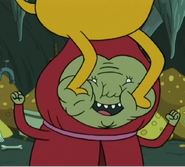