"Oh, Fionna" is a song that "Prince Gumball" (actually Ice Queen in disguise) sings to Fionna in "Fionna and Cake." It is sung while they fly through the air on Lord Monochromicorn and is accompanied by Cake playing her dulcimer.

Note: the key in the demo version as shown above is C major. The final version as heard in the episode is in the key of D♭ major, and the chords pitch up accordingly.

Gumball and Fionna singing together

Fionna blushing when Gumball is singing to her 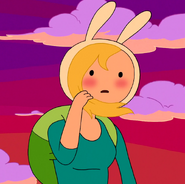 Retrieved from "https://adventuretime.fandom.com/wiki/Oh,_Fionna?oldid=798076"
Community content is available under CC-BY-SA unless otherwise noted.