"Ocarina" is the twelfth episode in the sixth season of Adventure Time. It's the one hundred and sixty-eighth episode overall.

In order to try to bring responsibility to his dad, Kim Kil Whan buys the deed to the Tree Fort and forces him and Finn to abide by his rules and learn about his problems.

The episode opens to find that it's the rainicorn pups' birthday, and they're waiting for their dad to show up with food. Jake shows up without presents and a small portion of "macaroni salad". Kim Kil Whan tells his father they have new business to discuss; this later unfolds to be that he has bought the deed to their tree fort. He takes them there to see their stash of money but there's nothing due to the events of "Furniture & Meat." They are only able to pay for the ladder with some vintage photos. Night comes, and people have moved into the house to Finn and Jake's dislike. Finn tries to adapt to his new surroundings but fails when stepped on. He proceeds to the bathroom to wash off the footprint to be arrested for entering someone else's room. They are bailed by Kim Kil Whan and taxed accordingly. This sparks a conversation between Jake and Finn about getting jobs, which triggers Jake to remember he hid some treasure, a Golden Bone, in the front yard. They then dig this up only to have Kim Kil Whan take it, telling them it was dug up on his property. They then decide Kim Kil Whan must be in some trouble and need their money to solve it. They link it to mob problems and follow Kim Kil Whan to his home in a forest. They see that it is a massive home that shows them he is actually indeed rich. So they attract his attention with stones, and when he comes, Jake presents him with his love and a present. This present turns out to be an ocarina that isn't hollow or even usable, but Kim Kil Whan accepts the gift and trades it for the deed to the house. Kim Kil Whan then proceeds to enter his house to be comforted by his wife. He talks to his wife about the fact he only wanted his dad to realize the real world and to stop acting like a child but then accepts that's his life choice and that "he's good."

The Snail appears in the bottom left corner.

Close-up of the statue 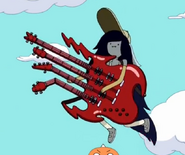