Steve Little
Alia Shawkat (younger)
Nurse Betsy Pound Cake is a Candy Person who makes her first appearance in "Mortal Recoil." She is one of the few notable health care providers in the Candy Kingdom, the others being Dr. Ice Cream and Dr. Donut. Despite being a medical professional, it is revealed in "Wizards Only, Fools" and "Nemesis" that Nurse Pound Cake is a believer of magic and otherworldly phenomena.

Nurse Pound Cake is in the shape of a square pound cake, hence her name. She is also lightly colored on all sides, indicating she has no crust. She wears a pink scrub and a white nurse's cap with a red cross on it. Nurse Pound Cake is also fairly short, and appears to be missing a couple of her front teeth.

Nurse Pound Cake is a capable health care provider who sometimes works closely with several prominent professionals, such as Princess Bubblegum and Doctor Princess. She is most often seen working in clinics within the Candy Kingdom. Nurse Pound Cake is also fairly intelligent, at least compared to the average Candy Person. She was also once an active reader, spending a significant portion of her teen years in a cave studying medicine. In addition, she was even able to find a cure for her "Crab Hand" condition while living in isolation.

Despite her profession, the nurse believes strongly in magic and the supernatural. In "Wizards Only, Fools," she is reluctant to give medical treatment to Starchy due to the patient's own belief in magic. When Princess Bubblegum makes fun of spells, she and Starchy both break out into tears. The nurse's belief in magic is likely due to her positive experience with her uncle's service as a magic worker. In "Nemesis," Nurse Pound Cake is revealed to be a member of a secret society called the Veritas Brigade. While in a meeting, she reports sightings of a shadowy figure around Princess Bubblegum's tower, stating that it may be otherworldly.

Nurse Pound Cake also appears to have a history of relationship troubles. In "The Diary," Jake's son T.V. discovers her teenage diary, which chronicles her angst about her romance with Justin Rockcandy. Eventually, their relationship is ruined after she develops "Crab Hand." This prompts her to ride out her teen years in a cave, where she studies to become a nurse. At some point in the future, she was either married or is still married, though she suffered some sadness over this that was cured by her uncle, a magic worker, as noted in "Wizards Only, Fools."

When Finn and Jake leave the hospital in "Two Swords", Nurse Pound Cake confesses to Princess Bubblegum that she's got a crush on Jake. 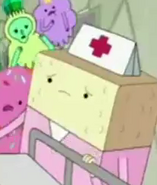 Nurse Pound Cake as a teenager