"Normal Man" is the seventh episode in the eighth season of Adventure Time. It's the two hundred and thirty-second episode overall.[2]

Normal Man asks for Finn and Jake's help to rescue his brother.[3]

In a ruined, overgrown city, Normal Man talks into a walkie-talkie. He is talking to Tiny Manticore, who is high in the sky, wearing an oxygen tank and mask, with the other walkie-talkie strapped to his head. His eyes bulge as he leaves the atmosphere. Glob turns on his eyebeams and spotlights Tiny. He grabs onto Glob and begins to fall back to Ooo. He briefly passes out during re-entry but wakes in time to open his wings and stop his descent. However Tiny double-crosses him and flies off, saying that it is his time to mess with him.

At the Tree Fort, Jake is watching something out the window. It is Normal Man, eating brownies on their doorstep. He says hello, but Jake throws a pot that knocks him out. They bring him inside and strap him to Finn's bed. They wake him by shoving a used sock under his nose. He asks for their help, for his brother Glob. Later, they reach the foot of Wild Trap Mountain, where Tiny took Glob. Tiny has Glob slung under him and waits at the top for them. Normal Man asks Finn and Jake to come with him, since Tiny always liked them. Jake mentions that Tiny liked them because they freed him from "your nightmare house." Normal man just wants to go back to Mars and have everything the way it used to be, "before I threw everyone under the bus." Jake takes this for a metaphor, but a flashback reveals that he actually did this on Mars, driving a schoolbus over and over around a ring of Martians, including a shackled Grob Gob Glob Grod. Abraham Lincoln says that as soon as he breaks his magic bonds, [Magic Man]'s going "straight to Ooo on that bus." In response, he throws some lit bangers, which explode in Lincoln's lap.

He says that he's going to go to the top anyways and "let Tiny margle [him] off a cliff" and that it will be a good thing for his brother to see. They agree to help, and Jake starts to stretch up with Finn, but Normal Man explains about the traps, which include normal-size Manticores, carnivorous plants, camouflage rock beasts, mind control parasites, archer bandits, a quiet little man, a dragon ghost, red ants, weekend survivalists, waking dream demons, and the Squirrel. They instead decide to sneak up.

They make it past the manticores Jonah and Luke, but Jake gets trapped by a carnivorous plant. They defeat the plants, but Jake's yells alert the other monsters. They run through the gauntlet of monsters, with Normal Man finally making it to the top. He begs for Tiny to not hurt his brother. Tiny threatens him with a boomerang and flamethrower. He offers to let Tiny kill him if Glob can go free. Tiny thinks he's insincere, but he says that's just the way his voice is. Tiny says that he has trained for this for months and lets fly with the boomerang. It returns and knocks Jake down. Finn and Normal Man rush up the mountain, dodging several more traps, but a second boomerang knocks Finn down. He aims his flamethrower, but Normal Man grabs Glob as he fires and the three shoot across the sky. Tiny panics, but then decides to let the others drop to their deaths. Jake tries to save them as a plane, but is still woozy.

As they fall they have a chat and make up. However, at the last minute, Tiny saves them and knocks out Lemongrab 3, who is on a picnic with Lumpy Space Princess. Finn carries Jake down the mountain himself.

Tiny leaves them at Normal Man's house and flies off. Normal Man and Glob leave for Mars, using the Ancient Martian transporter. We see Ooo from space, with the missing chunk. Glob bites Normal Man, causing him to be left behind, saying that Normal Man will do just fine ruling Mars on his own. Glob returns to orbiting Ooo.

Normal Man returns to Mars, where the Martians are living in a trashy lifestyle. His arrival panics them. Others are angry, since he changed them into things. He does a magic trick and pulls some brownies out of a top hat, which they want. He says that it's a start. 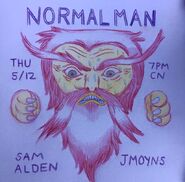 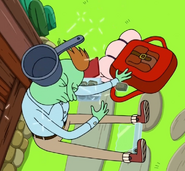 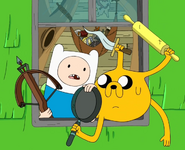 Finn in his "Stab himself" position while hypnotized 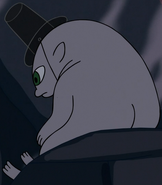 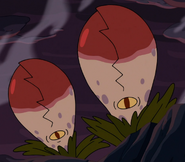 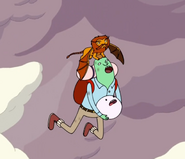 LSP & Lemongrab on a date 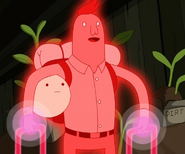 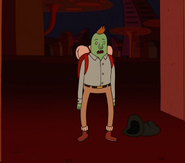