Ako Castuera
Jesse Moynihan[1]
"No One Can Hear You" is the fifteenth episode in the third season of Adventure Time. It's the sixty-seventh episode overall.

Finn and Jake stop an unearthly stag when Finn finds that his legs are broken, Jake has gone crazy, and all the Candy People are missing.

A hart is causing trouble in the Candy Kingdom by licking the Candy People's faces. Finn and Jake try to get rid of him, but he throws Jake off and kicks him in the head. Then, he breaks Finn's legs and knocks him out.

Finn wakes up in a hospital room and tries to get Dr. Ice Cream's attention. Not getting a reply from anyone, he gets up and sits on a wheelchair next to his bed.

He goes out for a stroll in the Candy Kingdom but cannot find anyone. He then finds Jake digging for food in a dumpster, occasionally reaching for a bandage on his head and saying "Ouchies," suggesting that he suffered a head injury. Jake explains that there is no one in the kingdom because he is waiting for the candy people to throw him a surprise party, stating that it is his birthday. At first, Finn believes this, shouting to the town, "I sure don't expect anyone to jump out at me!"

Jake takes Finn back to his makeshift house, telling him to collect wood for a fire for hobo's. He agrees and starts to wander around. Raising his arms, he realizes that he has bad body odor. Wheeling over to a fountain, he removes his hat and shirt and bathes in the fountain.

Finn wonders where everyone is, but Jake gets worried because he does not want Finn to look for everyone and "ruin the surprise." After that, the hart comes along, and Finn yells at him. He simply ignores this and gallops away. Finn hears noises coming from a nearby sewer, thinking that they sound like the Candy People. Finn tells Jake about this, asking him to give them more time for the surprise.

Finn becomes a little frustrated about waiting all day for the alleged surprise party. Jake claims he has been waiting six months for people to come out, and bugs crawl out of his ears while he says this. Finn realizes that Jake has become insane, and that they are not friends anymore. Finn then attempts to make a daring escape for the sewer, but the vicious Jake stops him and destroys his wheelchair.

Finn wakes up again, tied up to a post. Jake has several puppets out. He plays with them, saying "Happy Birthday, Jake!" Finn tricks Jake into letting him free, claiming that he will not run away from him. As soon as he is free, Finn tells Jake that he has a surprise for Jake, which he must close his eyes first. Immediately, Finn makes a run for the sewer. Jake tries to get him right on his tail, after realizing that Finn was lying to him.

Finn goes down into the sewer and falls into the water in it. He swims out and runs through a passage until he finds a strange-looking door. He opens the door and finds the Candy People there stuck to the walls with an orange substance. Jake soon finds him in the sewer, becoming excited to see all of the Candy People, since he thinks that it is his birthday party. Finn tells him to stop acting crazy and punches him.

The hart walks up to them, stands on his hind legs, and removes his front hooves, revealing his hands. Finn tries to attack him while Jake frees the Candy People. Jake climbs up to free more Candy People and is right above Finn and the hart. He unties the strings that are tying the bricks to his feet, which fall on the hart, knocking him out. Finn and Princess Bubblegum push the hart into the sewer drain, where he is washed away by the current.

Princess Bubblegum explains that the deer wanted their "sugar" and winks at Finn. Finn frowns and says "Boy, it stinks down here." They all proceed to go and take a bath. Jake carries everyone, and they float away on the balloons tied around Jake, holding on to each other by their legs. The episode ends with a Candy Person saying "I wanna get clean!"

Adventure Time - No One Can Hear You (extended preview)
Long Preview

Adventure Time - No One Can Hear You (shorter preview)
Short Preview 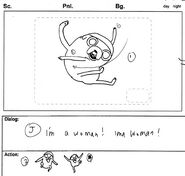 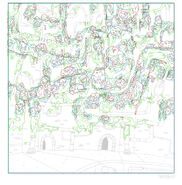 Finn gathering wood for the hut

Finn bathing in a fountain

Will the madness never end?!

Ouch, Jake made those knots tight.