"Evergreen"
Nina is a character who appears in "Evergreen". She is Gunther's pet.

Nina is a small, yellow, cat-like dinosaur. She is short and has eyes similar to Jake's. Her head has two large, rounded bumps on it.

Nina behaves like a cat, and even meows like one. She is loyal to Gunther and follows him around, even though Gunther bullies her sometimes, similar to how Evergreen bullies him. 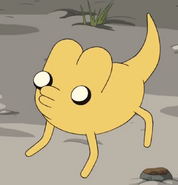