Nightmare Realm
The Nightmare Castle is a castle at which Finn, Jake, Gumbald, Fern, and Princess Bubblegum arrive after entering the subconscious realm after Jake hit them with the Nightmare Juice.

The exterior is similar to the Candy Kingdom it is surrounded by a Candy moat and Cotton Candy Trees. It is also surrounded by a mountain range and clouds. Most of these things listed are covered in eyes, spikes, and mouths filled with razor sharp teeth. The castle itself appears to have a skull on the top which appears to be the main room. Below this is a green, mushy body, attached to it are five arms and legs. Each arm is holding a corn on the cob.

Near the end of the fight between Finn and Fern, it was revealed that they had moved to the exterior of the castle. Out here, there were two knocked down Candy Trees with eyes at the bottom of their stems as well as axes in their stems. There was also a wooden table with a lemon juice dispenser and plastic cups. We again say the spikey eye trees and the spikey eye clouds. We also briefly see a different kind of Candy Tree with green and white swirlies for leaves.

The first floor has a wooden floor covered in spikes and eyes. It's wall is similar to that of the Candy Kingdom Castle. It also has an orange couch, a couch with wooden handles and a lizard tongue coming out from under it, a blue sitting chair, a table with a lamp and books, and a stove. After the Cosmic Owl emerged from the stove (disguised as a poodle), Gumbald ran to the other side of the room and revealed a purple fireplace. In the fireplace was an old Jake. On it was a pot with a clock in it, a sign that said "Laff it off," a red marker, and a skill with a four-leaf clover in it. Around it was a mug that said "World's Worst Uncle" merged to the wall and a sign on the floor that said, "I'm happier this way" and at the bottom it said "Chicle" with a backwards e.

After Gumbald and Princess Bubblegum left, things started changing. The first thing that changed was that the floor became tiled and red. Secondly, after Finn requested help from Jake, Jake became a waiter and restaurant tables appeared, sitting at one of them was Jermaine (whom had appeared earlier via request of Jake). After this, Fern turned into a pterodactyl and Finn turned into a butterfly. When they went to have a battle in the sky, the roof disappeared offscreen, and then later some of the walls. On a remaining wall, a door in the shape of Finn's hat appeared, which led to the Balloon Room.

The Balloon room held a pair of lips that created balloons out of it's mouth. These balloons seemed to be references and Easter eggs. In the balloon room was a series of escalators all descending into different exists. The walls appeared to look like balloons in the shape of goop, and behind this appeared to be outer space.

After some talking in the balloon room, Jermaine disappeared and Jake's arms were replaced with that of Lady Rainicorn. This room is seen very briefly. It appears to be the surface of the moon surrounded by darkness. In this room, Lady Rainicorn opened a portal to the Repressed Room.

The repressed room seemed to be completely red. The interior looked very similar to that of the interior of King Man's house, with piles of dirt and plants scattered everywhere. In the center of the room was a box made to look like a house. Inside the box were Jake's Pups as babies. After this, the room was revealed to be filled with much negative energy. This can be concluded from the puppies being teleported onto a stove. Some of them appeared into a pot of soup while others appeared next to it, looking like food. Jake began to cry out in agony when his but sniffed the ground, and located Finn and Fern's Repressed Memories. 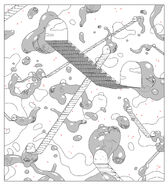 Castle with new floor and no walls