Adventure Time Wiki
Register
Don't have an account?
Sign In
Advertisement
in: Characters, Who Would Win Nominations, Male,
and 11 more
English

Neptr (or N.E.P.T.R., an acronym for Never-Ending Pie-Throwing Robot) is a pie-throwing robot Finn created solely to prank Jake who first appears in "What is Life?". He usually calls Finn "Creator", and the Ice King "Papi".

He came to life when Finn became frustrated that his shoddily-assembled "robot" was not working and threw the creation out into the rain, where he was hit with a lightning bolt. This brought Neptr to life, though he was not fully functional. Finn took him to the Ice King's palace to use the villain's lightning bolts to fully charge him. When he was hit with Ice King's lightning bolt during the resulting battle, part of Neptr's personality was changed to a desire to collect princesses causing him to become slightly evil, but he also becomes powered up to full power. Neptr admires Finn's pranks and has decided to keep Finn as his companion, and has also decided to prank Ice King hardcore. However, he is shown to have some compassion, as he says goodbye to the (unconscious) Ice King before leaving with Finn, causing Ice King to shed a tear. After this, he and Finn throw never-ending pies at Jake.

Neptr returns in "Hot to the Touch", where it is revealed that he was hiding for 15 months, 4 days, and 9 hours in a game of Hide and Seek that was accidentally forgotten by Finn and Jake. He assists the two by constructing (crudely made) heat-retardant suits while singing the "Working for the Master" rap, in order to get close to the Flame Princess.

Neptr once again returns in "BMO Noire", where he awoke BMO while they were unconscious. Neptr proposed that BMO and he should hang out more since they are both robots, but BMO rejects his offer saying, "I am not like you."

Neptr later reappears in "Mystery Dungeon", wherein he is captured by the Ice King along with Lemongrab, Tree Trunks, and Shelby. However, it was later revealed that Ice King meant to grab BMO and not Neptr. The Ice King seems to have forgotten about Neptr, but after Neptr opens the door leading to the Ancient Sleeping Magi of Life Giving, Ice King suddenly remembered him as "the grand prize of me loins" and accepts him as his son.

Starting with the season 6 episode, "Sad Face", Neptr began to have a more prominent role in the series, appearing more often, usually as BMO's sidekick, and a part of the Tree House "family."

Neptr is made from pieces of junk stuck together with tape. His components are an electric oven, a soup can, a circuit board, wires, a tuning-fork, and small tank treads possibly from a toy. Finn drew a face on the soup can, intending it to function as his face, but the knobs on Neptr's side became his face when he was brought to life.

Neptr speaks in an electronically filtered upbeat but stilted voice.

Neptr's main abilities are producing never-ending pies from his oven and ejecting them at somebody. He is very intelligent and can also build fire-proof suits, as seen in "Hot to the Touch", and control them to a degree.

Neptr and Finn have a very good friendship. He helped Finn defeat the Ice King by pranking him in his decision to live with Finn in the episode "What is Life?". In the end, he chose to live with Finn to prank people like Jake. Even though it was mentioned in "Hot to the Touch" that Finn and Jake left Neptr hiding in their shed after a game of Hide and Seek over fifteen months, four days, and nine hours he still moved on to help Finn and Jake create a battlesuit to save the Goblin Kingdom from Flame Princess. Neptr also sings the song "Working for the Master" saying in the song "I live to please you father" saying he thinks of Finn as a father. After Finn cries over not finding a girl, Neptr says "I still love you" implying he cares about Finn. However, in "Don't Look", Finn turned Neptr into a lifeless microwave under the power of the cursed eyes, implying that Finn may just see Neptr as a thing rather than a living being, however, he regrets it heavily afterward, showing that he does still care for Neptr. It is possible he sees Neptr as his son instead of a microwave afterward.

To Jake, Neptr is a friend at times. In the episode "What is Life?", Neptr was sort of an enemy to Jake after he pied him to help Finn prank him. Though mentioned in the episode "Hot to the Touch", Jake played Hide and Seek with Finn and him, indicating that they are friends. He also helps him and Finn create battle suits to save the Goblin Kingdom.

In the episode "BMO Noire", Neptr awakens BMO and tells them that the only people down there were both of them and Ronnie. Neptr also offers BMO pie but BMO wanted to go find the sock. Neptr also says they should hang out sometime since they're both robots, but BMO replies "I'm not like you," possibly indicating that BMO views him as inferior due to his odd personality and slipshod appearance. However, in "Sad Face", Neptr and BMO were seen together spying on Finn and Jake. BMO shared their experience of Jake's tail leaving the Tree Fort with Neptr and told him that it only happened once a month, indicating that BMO had possibly developed a level of intimacy and brotherhood with Neptr. By now, they seem to be on good terms with each other and might have possibly befriended each other. Later on, in "Furniture & Meat", they are seen playing with each other again and later save Finn and Jake from Wildberry Princess's execution. In the episode "Skyhooks", when Neptr was turned into Nectr by Princess Bubblegum's elemental powers, BMO says that they will "start treating him as an equal", which may mean that they hung out with him but didn't see him as an equal.

Neptr first interacts with Ice King in "What is Life?", when Finn wanted to fully function Neptr with the Ice King's ice powers. After this, Ice King explains to Finn that after he zapped Neptr with his ice power, he became infused with the Ice King's private particles and also became his "son." They interact with each other again in "Mystery Dungeon," where they work together, along with Tree Trunks, Shelby, and Lemongrab. For the most part, Neptr tries very hard to gain his "father's" affections and is greatly disappointed that Ice King had forgotten him. He got his feelings hurt when it was revealed that Ice King had kidnapped the group and had accidentally picked Neptr. He blurts that he had wanted BMO instead and not Neptr. However, Neptr is still loyal to him and forgives him after they escape the dungeon. When he sees Ice King disappointed that he could not bring his fanfiction to life, Neptr reminds him to use his Imagination Zone, just as before. Neptr comforts Ice King that anything can be real in the "garden of [his] mind."

Neptr and Tree Trunks never interact with each other until "Mystery Dungeon", wherein they work together, along with Ice King, Shelby, and Lemongrab. Although, he gets a little jealous of her because she makes pies and everyone thinks she is the only one who could make pies when he also could.

Neptr never really interacts with Flame Princess, although he nearly killed her when he was about to extinguish her. However, several seasons later in "The Music Hole", they form a rap duo together to compete in the Battle of the Bands. They are shown to still be part of this rap duo in the montage at the end of "Come Along With Me". 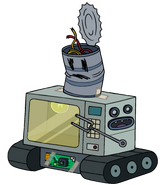 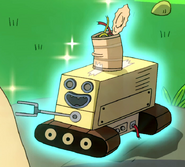 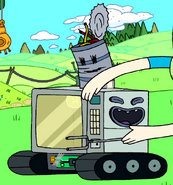 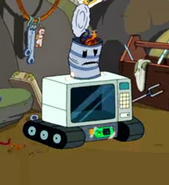 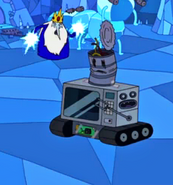 Ice King about to strike Neptr with lightning

Jake, you've found Neptr! I am the ultimate hide-and-seek champion!