Jesse Moynihan
Derek Ballard
"Nemesis" is the fifteenth episode in the sixth season of Adventure Time. It's the one hundred and seventy-first episode overall.

A mage known as the Peace Master attacks the Candy Kingdom in order to remove a horrible evil within its vicinity.

The episode begins with Kenneth entering an old comfort room. He meets a peanut man sitting on the toilet. The peanut asks him for his errand and then after answering, the peanut man presses a green button, opening a secret entrance from the urinal. The hidden passage leads to the hideout of Veritas Brigade where the members are having a meeting.

It is then shown from Princess Bubblegum's viewpoint that she is monitoring the Veritas Brigade through a hidden camera.

Back in the meeting, Kenneth rises from his seat to explain his invention, a device that broadcasts waves that can disrupt parallel dimensions. Starchie gets impressed and writes down information on his notepad. Suddenly, we hear laughing coming from the corner of the room. Peace Master is seen laughing and stands up from the dark corner and walks towards them telling how dangerous that device is. He walks up to Kenneth and slaps the device out of his hand which falls on Starchie's head. Peace Master explains how he hates evil. He warns everyone that there is a dark entity in Ooo (alerting Princess Bubblegum from her monitor.) He then finds out the camera which Princess Bubblegum used to spy on the meeting and tells that he is going to vanquish whoever was watching through that camera.

Back in Princess Bubblegum's viewpoint, the camera turns to static and triggers an alarm that sirens the whole Candy Kingdom.

Back in the meeting, Peace Master jumps out of the window. Starchie says that he'll be ready when Peace Master returns and takes a bite out of a pickle attached to the device.

Peace Master is now running to his minivan where his three children are waiting. As he is driving, his daughter asks if she could go to a dark arts fair the next day to which he replies no. Then his son throws a boot at him which stresses him out. Suddenly his youngest child throws up on him causing him to crash the mini-van. He gets out and blames the accident on dark arts. He then kicks the vehicle repeatedly as Peppermint Butler watches him.

Now we see Peppermint Butler go through a door and exit through another door in that room. After that, Princess Bubblegum opens the door and sits down and phones Finn and Jake.

In their house, their telephone is in the bathroom and is seen ringing. It then stops ringing and Finn and Jake rise up from a bathtub filled with water. Finn asks Jake how long his count was. Jake replies that his was three minutes, while Finn says that his own count was three minutes and 30 seconds. Rattleballs emerges from the bathtub as well, saying that his was 57 seconds. The three of them decide to continue and do it again.

At a corner, Peppermint Butler watches Peace Master leave and then walks away. We then see a CCTV camera through which Colonel Candy Corn is spying on a snail licking a plant. He then reports it to Princess Bubblegum at the side, but she is looking for Peace Master. The episode ends after Peppermint Butler gives Princess Bubblegum tea and walks out. 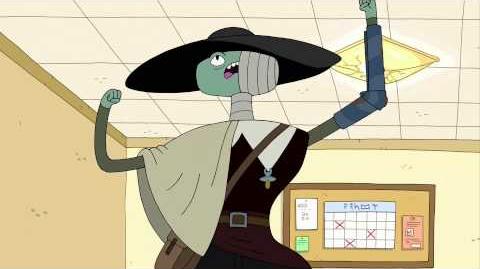 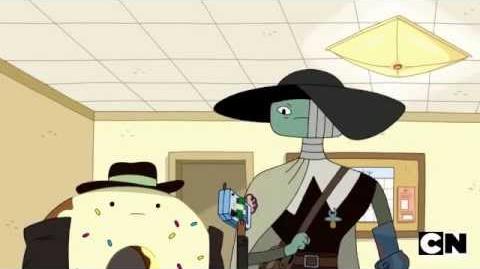