Source of candy juice for the Candy Kingdom

Neddy, like Bonnibel, was born from the "mother gum," or the gum hive. When Princess Bubblegum was born, she was gently dropped into a puddle of water. Shortly after, Neddy was dropped onto a sharp rock, causing him to scream and run away. While Princess Bubblegum explores, Neddy terrifyingly screams through a path filled with sticks and twigs. He finds comfort sucking the nutrients from a candy tree, which then causes him to excrete candy juice.

Princess Bubblegum has built a safe place for Neddy deep within the Candy Kingdom, where he sits alone and content sucking on candy tree roots and producing copious amounts of candy juice, which the Candy Kingdom uses for bathing and for its healing properties. He had lived there in supposed peace before the King of Ooo disturbed him, causing Neddy to run away in a panic. Princess Bubblegum successfully brings him back home.

Neddy is a shy and sensitive Candy Dragon. Neddy seems to have a very infantile mentality and easily frightened, especially by the presence of other people or creatures or even funny looking plants, to a near-crippling degree. Nearly anything outside of his extremely narrow comfort zone sends him into a terrified panic. His only source of comfort is suckling candy tree roots and his beloved sister's lullaby. Though not officially confirmed, it very likely that Neddy has low-functioning autism. 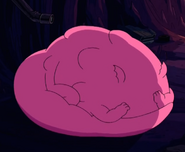 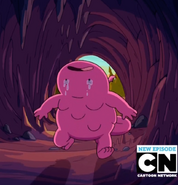 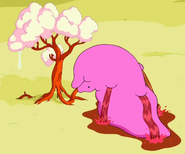 Princess Bubblegum and Aunt Lolly singing to Neddy.
Add a photo to this gallery

Retrieved from "https://adventuretime.fandom.com/wiki/Neddy?oldid=790149"
Community content is available under CC-BY-SA unless otherwise noted.