The mystic pods are gigantic beanstalk-like plants that sprouted from the Magic Beans in the episode "The Pods." They have huge, bulging sacs at the tops. The first pod is blue with droopy leaves and spawns adorable Baby Pigs dressed in silly costumes. The second pod is twisted and covered in sharp thorns. It produces colorful magic wands that spout glitter and emit rainbows. The third is bright green with "lily pads." It creates ice cream magically out of thin air, which happens to be the Baby Pigs' weakness.[1]

The magic beans appear in "The Pods." They are in a mystical chest guarded by a Gnome Knight. Two are good, but one is evil. To figure out which is which, Finn and Jake decide to plant the beans and finish off the evil once the pods sprout. While the beans themselves are identical, the pods which sprout from them are altogether different.[1]

Inside the third pod 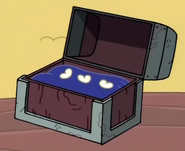