"Mystery Train" is the nineteenth episode in the second season of Adventure Time. It's the forty-fifth episode overall.

On a train ride to Finn's birthday present, he and Jake are thrust into a high-speed who-dun-it where suspects are being murdered one by one.

While Finn is sleeping, Jake blindfolds Finn with an orange blindfold. When he wakes up, Finn cries out that he is blind. Jake informs him that he is just blindfolded and leads Finn to a surprise to celebrate his 13th birthday. Finn and Jake go to the Cotton Candy Forest, where Jake takes off Finn's blindfold, revealing that they are near a train, and tells Finn that a train is needed to get to the surprise. While Jake goes to get the tickets to the train, Finn meets the Conductor, a pink-skinned man in a blue suit. Finn gets creeped out by the Conductor because of the Conductor's strange voice, but he and Jake go climb board the train regardless.

The Colonel says he has one on the train, but before he could reveal who it is, the lights flicker once again, and Colonel Candy Corn is found dead as well. When a Gumdrop says the murderer could be anyone, even Finn, Finn accuses the Gumdrop of saying that to divert suspicion. Before Finn can further interrogate the Gumdrop, the lights flicker, and another skeleton sits in the Gumdrop's place. Finn next accuses a Candy Person who believes Dr. Donut killed everyone as well as the Colonel to protect his alibi. This too is disproved when the lights flicker and Dr. Donut's skeleton falls to the ground. Finn exclaims, "Son of a...," the last part being interrupted by the train whistle as censorship of a cuss word. Finn continues to hunt for clues, gathers the remaining train passengers to the back, and proceeds to iterate each passenger's potential motive. Before Finn is able to reveal the culprit, the lights flicker, and all the remaining Candy People fall to the floor, dead.

Because of this, Finn realizes it must have been the creepy Conductor, who had earlier given his being "awesome and cool" as an alibi. After this epiphany, Finn hugs Jake, the lights go out a final time and return to show Finn hugging Jake's skeleton. Next, the Conductor appears and charges at Finn with a sword, who parries with another sword that had been lying on the floor. The Conductor retreats three times to cars nearer the engine, unlatching the car behind him each time. Finn pursues the Conductor until they reach the engine and swings his sword at the Conductor, who dodges, instead hitting the control panels. Enraged, Finn shouts, "My birthday wish is vengeance! Happy birthday to me!" and prepares a finishing downward slice. The Conductor yells to wait, then falls to the floor, transforming into a pink and blue paint-bedaubed Jake, who confesses that the skeletons (and deaths) were all fake and that the murder mystery was Finn's birthday surprise.

With the control panel broken, the train approaches an area of unfinished track at the edge of a cliff, careens off it, and lands in a giant mound of gelatin, where Finn and Jake join the rest of the Candy People for Finn's 13th birthday party. While eating cake, Jake asks Finn which part he liked most, and Finn tells him that it was the train's falling into the gelatin. He then comments that it must have taken careful planning to execute; Jake responds by saying that the gelatin was actually unplanned and that if it had not been there, they would have died horribly. The episode ends with Finn looking up at the broken tracks while mysterious music is playing. 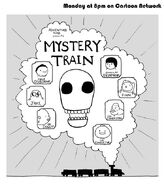 The other passengers' skeletons

A tunnel before Candy Cane Man is murdered 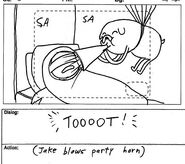