"Mystery Dungeon" is the eighth episode in the fifth season of Adventure Time. It's the one hundred and twelfth episode overall.

An unlikely group consisting of Ice King, Neptr, Tree Trunks, Shelby and Lemongrab must work together to escape a dungeon they mysteriously awaken in.

The episode starts out with Ice King, Neptr, Tree Trunks, Shelby, and Lemongrab awakening in a dungeon. Lemongrab starts to say cryptic words, leaving the others in confusion. Tree Trunks asks Lemongrab what he just said, and he says he was reading the words on the wall. Then, all the characters start reading the wall, which says:

The walls then start to come in on everyone. In panic, Tree Trunks opens a door, not knowing that it leads to a deadly drop deep into the dungeon. Neptr saves her with one of his "mods" (an extendable arm). Through all the confusion and panic, Lemongrab notices the lock for the trapdoor on which they were standing and proceeds to unlock it.

Falling to the next room, the Ice King quickly notices its lack of doors. Lemongrab, in frustration, asks how the Ice King tastes. Ice King says he does not know. Lemongrab gets angry and screams, "MILD OR SPICY?!" Ice King remembers himself kissing his hand, and he says, "Kinda lonely." Lemongrab then demands that the Ice King "make [himself] into food." Neptr quickly breaks up the fight, pointing out that he found an oven and baking supplies. Tree Trunks says she can bake an apple pie for them. Minutes later the pie is done, to the delight of the hungry group. The pie's aroma lures a giant rat out of a secret door, which quickly eats the pie. In anger, Lemongrab punches the giant rat; and starts eating the pie out of its mouth (to the disgust of the others). The Ice King then points out that the rat showed them the room door.

They crawl towards the next room, which has a pool of steaming water with a giant fish tied to a plug on the floor. Ice King tries to fly them over, but the steam is nullifying his powers. He then tries to freeze the water, but the steam quickly cancels the magic before it even leaves his hand. Giving up, he tells the others they can have his corpse for food, to which Lemongrab wholly assents. Shelby thinks of an idea, which involves using Tree Trunks as bait. The Ice King then struggles to reel the fish out of the water with Neptr's help, unplugging the hole in the process. Tree Trunks frees herself out of its stomach with the dagger that she was biting down on, and they proceed to the next room.

Upon entering, they quickly encounter a giant three eyed tentacled monster. The group would have been overwhelmed had it not been for Lemongrab's juice being squeezed out by the monster (which seems to be its weakness). The encounter leaves Lemongrab literally drained. Tree Trunks then inflates him back to normal, oddly restoring his "vital juices" in the process. The group then enthusiastically runs to the next room, unaware of the fact that the bridge is broken. Using his torn robe as a makeshift parachute, the Ice King flies them to safety and in front of the door to the central room.

Neptr then explains that the door is secured by an esoteric encryption system. The Ice King confidently replies that he can easily "hack the mainframe" (mistaking Neptr for BMO). Neptr confusedly states that he throws pies. Ice King then angrily states that he grabbed the wrong robot, which makes Tree Trunks and Shelby realize that something is wrong. The Ice King confesses, explaining that he brought them to the dungeon due to their unique qualities—qualities which enabled them to get past the various tests of the dungeon. The Ice King is ready to give up, frustrated that he accidentally brought Neptr along instead of BMO. Still eager to please his "father," Neptr throws a pie at the door, breaking and opening it in the process.

It is then revealed that the door contains the Ancient Sleeping Magi of Life Giving. The Ice King explains that anything that goes through its flames comes to life. Showing the others his "Fionna and Cake" fanfiction, the Ice King reveals that he intends to bring the characters of his fan fiction to life. A dismayed Lemongrab attacks the Ice King with his sound sword, which strikes the Ice King, but not before he throws his fan fiction towards the flames. However, the flames can only bring the book to life, not what is written on it. A disappointed Ice King is quick to blame and insult the Magi, calling him a "bum" and telling him to "get out of [his] face."

Finn and Jake are then seen on the grasslands, following the smell of the pie that Tree Trunks made earlier. The Magi then flies off behind an unaware Finn and Jake, followed by the rest. A depressed Ice King sits down nearby, approached by Neptr. Neptr comforts him, saying that his characters can always be real in "the garden of his mind." Delighted, the Ice King imagines talking to Fionna, unaware that it is actually Neptr talking. Finn, Jake, and Shelby watch from a distance wondering who in the world is sadder than the Ice King, to which Shelby replies, "Me, watching this." 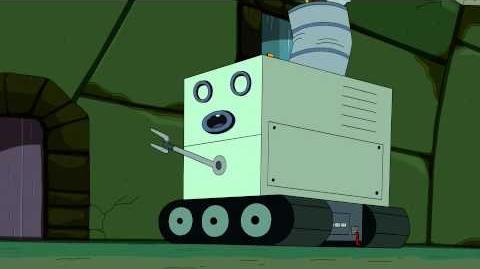 The promotional art for the episode

NEPTR pointing out a nearby oven

Everyone smelling the apple pie Tree Trunks made

A giant rat eating the apple pie Tree Trunks made

The Ice King's ice being turned to steam

Shelby next to the Ice King's leg

Lemongrab with his sound sword 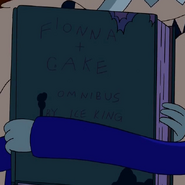 The Ice King conversing with Fionna in his mind