The music box is brass-colored with a ratchet lever with a brown handle to operate it. The music cylinder sits on a bedplate between two dogs with outstretched arms (the two dogs could be Jake and his brother, Jermaine). The uppermost base is decorated with orange outlines of triangles, while the lowermost base is decorated with brown circles. Their paws glide along the cylinder's bumps to produce a musical sound. 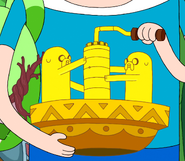