Muscle Princess has a rowdy personality, often relying on her strength instead of her brain. She has also been shown to have trouble reading a room, an example of this being when she believed Finn wanted to date her. Muscle Princess is also very hotheaded and gets easily angry. 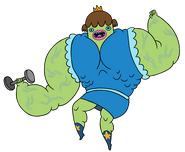 The entrance to her castle