Like Muscle Princess, he has a large physique and light-green skin. He also has a brown beard and hair, with his head shaved from behind. His clothing consists of a pair of blue pants, dark blue boots, and two straps on his shoulders. He also wears a small golden crown with a red gem in the middle.  In "The Prince Who Wanted Everything", he wore a shirt and the gem in his crown was blue instead of red. 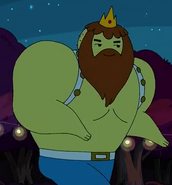 Add a photo to this gallery
Retrieved from "https://adventuretime.fandom.com/wiki/Muscle_Prince?oldid=820018"
Community content is available under CC-BY-SA unless otherwise noted.