Pendleton Ward
Mrs. Yoder (also known as Momma Bird) is a bird who appears in the episode "To Cut a Woman's Hair." Finn feeds her baby birds by chewing up an apple and spitting it in their mouths, and she calls him a hero for doing so. The Tree Witch hears her, starting the plot of the episode. She looks somewhat similar to the original version of Intestine Bird, but they have different eyes. It is unknown how her beak was broken or wounded.

Mrs. Yoder looks like a blue jay with an orange beak. She has some sort of bandage tied on the top part of her beak (this is the reason Finn has to chew food for her babies). 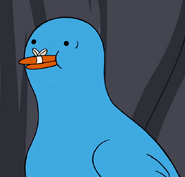