"All the Little People" (as a toy)

Kent Osborne
Mr. Turtle makes his first appearance in the episode "City of Thieves." He steals a ruby from Skeleton Baby and inserts it into the larger ruby that sits on top of his head, where it fits perfectly. Not much is known about him, but it is possible that he may be royal due to the ruby crown he wears. He also has a jetpack within his shell, which he uses to escape from Finn and Jake before they are able to "purify" him. The ruby then gets stolen from his crown by Crossbow Guy.

Mr. Turtle is a bipedal turtle that wears a small gold crown with an enormous ruby that fits in the top. He has light green colored skin with a dark olive-colored shell.

Mr. Turtle without his ruby 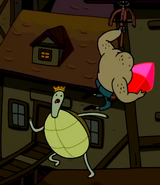