Ron Lynch
Mr. Pig is a character who first appears in "Apple Thief." In this episode, he is referred to simply as "Pig" until later in the episode when Tree Trunks calls him "Mr. Pig". In his debut, Jaybird orders Finn, Jake, and Tree Trunks to be executed by having the Pig eat them alive. Even though he worked with villains, Pig appears to have a nice personality. He was probably forced to do what he did, as he said, "they're making me do this." He has a developed an acute sense of hearing, shown when he identified Tree Trunks' lost apples by their "sound." This is fitting since pigs in real life have excellent hearing. As a result, he was very helpful to Tree Trunks, Finn, and Jake. He's also seen in "Holly Jolly Secrets Part II," when Tree Trunks is walking up to him. In "Dream of Love" he starts a romantic relationship with Tree Trunks and the two marry in "Apple Wedding." In "Escape from the Citadel," Tree Trunks begins to suggest she and Mr. Pig get a "di—" when the doorbell rings. They open the door to find The Lich, now a giant baby, and Tree Trunks joyfully exclaims that this "changes everything. They adopted the Lich baby and named him "Sweet Pig-Trunks" or Sweet P for short.

Mr. Pig is in most ways a normal looking pig. He is about the same size as Tree Trunks. Interestingly, his feet are hoof-shaped, but there are no hooves.

Pig makes a major appearance in "Dream of Love" as Tree Trunks' lover. In this episode, it is revealed that he stayed at Tree Trunks' house and is secretly in love with her. Tree Trunks again refers to him as "Mr. Pig," which is now his official title. Mr. Pig confesses his affection for Tree Trunks, and she admits she loves him back, which results in the two publicly displaying their affection for one another. The citizens of the Candy Kingdom become disgusted by their displays of affection, which resulted in Finn and Jake trying to separate the two. Later, Jake asks him where he lives and Mr. Pig reveals that he is homeless and would eat criminals (odd considering that in his previous appearance he appears to be working for diamond thieves). Finn and Jake eventually accept Mr. Pig and Tree Trunk's love for one another. Then in the episode "Apple Wedding," Mr. Pig and Tree Trunks were married. 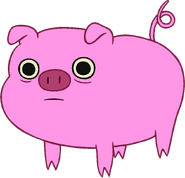 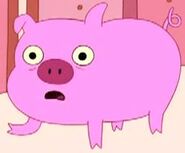