Sam Marin
Mr. Goose makes his only appearance so far in the episode "Storytelling." He has wanted to date Boobafina for years. At the end of "Storytelling" after Boobafina admits her love to him, he is able to admit his feelings for her. He is very shy with Boobafina, but very excited to hear her say she loves him. Boobafina was really upset when she and Mr. Fox were forced to kiss (touching their mouths together) because of Finn, who needed a romantic story for Jake. She said she was "soiled" and Mr. Goose wouldn't love her, indicating they already had some romantic tension. He is one of many animals present at the Rite of Forest Justice.

Mr. Goose looks like a male Boobafina, though probably because they are both geese. The major difference is that Mr. Goose is a bit larger and the stripe on his neck is straight and dark blue, in contrast with Boobafina's wavy teal stripe. Also, Mr. Goose's bill and feet are a dark shade of orange. 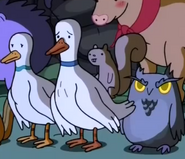