Tom Herpich
Mr. Fox first appears in the episode "Storytelling." Finn forced him and Boobafina to kiss for a touch of romance in Jake's story. Afterward, it is revealed that Mr. Fox had a crush on Boobafina all along and wanted to kiss her. Finn starts to think that he helped Mr. Fox, who then says she will never like him because they needed to kiss naturally. Later, Finn tells Mr. Fox that "Boobafina is not interested. It's time to move on." Mr. Fox is sad to hear this, but accepts that Finn is right. It is unclear if the two are still friends. He is one of the many animals present at the Rite of Forest Justice.

He appears next in "Jake the Dad" trying to convince the other foxes that they should find and eat a baby due to coming upon the book Baby Eating Fox and the Babies after Jake drops it.

He also appears in "Another Five More Short Graybles," in which he shows his home to the audience, describing its components and discovers that his subconscious self was writing a treasure map for him.

In "Astral Plane", Finn's Astral self visits his home for a few seconds, in which Mr. Fox's astral self is in a chair doing a Sudoku puzzle, while his physical body is sleeping, talking about Boobafina in his sleep. He offers Finn a drink, either forgiving him for ruining his chances with Boobafina or not remembering him at all, but Finn beyond his control leaves for the next location which Mr. Fox deemed "sorta rude."

In "Together Again" set years later into the future after his apparent death, Mr. Fox becomes the ruler of the Land of the Dead after the death of New Death.

Mr. Fox looks like his namesake. He can walk on two legs, but runs on four. He has bags under his eyes, but that could be because he was constantly stressed throughout the episode "Storytelling."

His new form, Mr. Death, appears rather similar to Death. However, instead of a horse skull, Mr. Death's skull resembles that of a fox, and he wears a taupe bathrobe with cream-colored trims, pink bunny slippers, and Death's hat. He also has a pillow, and can conjure as many as he needs to so the souls that reside with him can know blissful peace and rest. 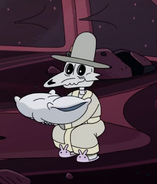