"Mortal Recoil" is the twenty-sixth episode in the second season of Adventure Time. It's the fifty-second episode overall.

Princess Bubblegum recovers from being dropped in the Well of Power by the Ice King; however, she is altered and her condition leads to an unlikely final showdown with one of the greatest evils in order to save all life in Ooo.

In the previous episode, Princess Bubblegum was accidentally dropped by the Ice King into the Lich's Well of Power. The episode begins with Dr. Ice Cream and Nurse Pound Cake, along with other candy hospital staff, rolling her into the ER trying to stabilize her. She is stabilized but does not seem to be acting normally, and is paler than her natural hue. Ice King tries to explain something strange he saw when Princess Bubblegum fell in the well, but Finn—still mad at the Ice King for almost killing her and for making insensitive comments during the surgery—interrupts and nearly kills him by throwing his Root Sword at him, telling him, "Just shut your mouth, old man!" The Ice King denies this appellation, but affirmation of the other princesses hurts him and he flies away. The other princesses give Finn a new backpack. Princess Bubblegum is still very ill and is confined to her room, with Finn and Jake acting as her caregivers. When she wakes up, Finn and Jake reveal they have picked every flower in the Candy Kingdom for her.

However, she exhibits strange behavior and is not acting like herself, such as trying to get cleaning supplies. Finn returns her to her bed and takes some time to confide his feelings to her, asking Jake to leave the room. Finn thanks her for the sweater she made him due to it have "the power of liking someone a lot" because she cared about him and tells her that they should discuss their feelings later, and she asks him for some "things." When Jake and Peppermint Butler return with a cup of tea, Peppermint Butler suddenly freaks out, as the princess is oddly whispering like the Lich. Peppermint Butler hisses and runs off, leaving Jake suspicious.

While Finn is away, Jake tries to play some music for Princess Bubblegum, but the princess just spasms and growls, even killing all the flowers collected in her room and sets it on fire, causing Jake to run out and wonder if the well did something to her brain. When Finn returns to the hall outside, he is holding an assortment of items, which he reveals are things like gasoline, bleach, ammonia, lighter fluid, plutonium and other hazardous chemicals. Jake urges Finn to not bring the chemicals to Princess Bubblegum, but she just calmly takes them.

Jake then tells Finn of the fire she summoned, which alarms Finn. The two enter the room to find it empty and dark, with the bathroom door closed. Finn believes Princess Bubblegum is just having private time in the bathroom, but a skeptical Jake looks through the keyhole. Finn protests that Jake is acting "pervy," but Jake makes him look in. They see Princess Bubblegum, now in a demonic form with disproportionate limbs and dark-purple-black skin, pouring the chemicals into her bathtub. When she starts drinking the liquid, Finn and Jake try to stop her, but she rips the tub off of the floor and drinks the entire concoction, growing into a monster as tall as her tower and powerful to the point where a gumball guardian must fight her.

She knocks the boys through the wall into the hallway, and as she begins to attack the Candy Kingdom, Ice King appears and explains that he saw the Lich possess Princess Bubblegum with his "Wizard Eyes," and but he had not spoken up earlier because "when you have stanky old wizard eyes, sometimes you see things that are real, and other times it's like crazy, crazy, crazy, in your face all the time." He wants to help Finn and Jake, but Finn angrily refuses his assistance.

Ice King immediately loses interest in her and leaves. Finn remarks that he is thirteen as well. Princess Bubblegum calls him a hero, and the two share an embrace. As everyone celebrates, the snail (who freed the Lich in "Mortal Folly") is seen waving menacingly in the background, sighing with eyes that glow like the Lich's. 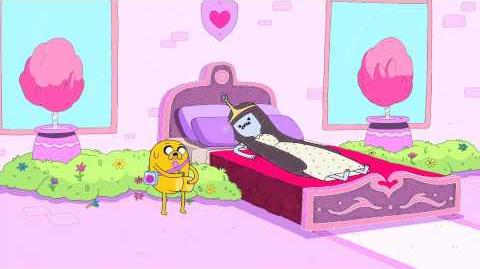 A close-up of younger Princess Bubblegum

Pep But hissing at the Lich-possessed Princess Bubblegum

The snail with the Lich-like glowing eyes

The Candy People worry if Princess Bubblegum will survive.

Princess Bubblegum's not looking too good...

"Nobody wants to see this old skin, I guess. Nobody in the world..." 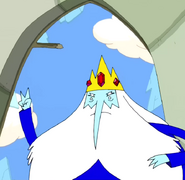 Princess Bubblegum possessed by the Lich.

Finn goes through his things for Princess Bubblegum.

The Lich King's spirit finds a new vessel to inhabit.

Well, at least this time the Ice King wasn't responsible...

Everyone waiting patiently outside the ER for Bubblegum's prognosis.

"Well, I'm out of here. Goodbye everyone."

Unfortunately, we have not yet seen the last of the Lich King...