"Morituri Te Salutamus" is the second episode in the third season of Adventure Time. It is the fifty-fourth episode overall.

The duo choose to partake in gladiatorial combat against the Fight King's ghost warriors, but Finn succumbs to bloodlust while Jake becomes obsessed in keeping a cool morale.

After barely rescuing a bunch of Cute Animals from a Burger Monster (Finn's plan apparently went wrong because Jake doesn't follow it), Finn and Jake are lured to an arena by the sound of fighting. Once at the Fight King's Arena they meet the Fight King, who promises glory if they step through the seal on the arena. Finn and Jake instantly figure out it's a trap and leave, but then they begin to fantasize about the things in the arena they would face (sealing exits, Gladiator Ghosts, etc.) and come back and to the Fight King and it is just that.

After defeating two Gladiator Ghosts, the Fight King gives them olive branches and Finn and Jake prepare to leave because Jake's thighs hurt, but the Fight King stops them and says they must earn their freedom by defeating each of his ghosts. He then sends them to a cavern under the arena to rest until they are ready to fight again. Finn makes a plan to do what the Fight King says and defeat the ghosts to earn their freedom, but Jake morphs the plan into switching himself with a dirt dummy and dig for lava to forge a molten hula hoop to increase morale, stating that the cave will be as fun "as a tropical island". Finn goes along with the plan and goes back to the arena with the dirt dummy to fight more gladiator ghosts. After defeating the ghosts the Fight King gives Finn his "Favor" by knighting him with his sword and he becomes more violent (than usual), striking random fighting poses. Then Jake comes back up to see what is happening and Finn almost hits him when he goes into his "kill zone". When they go back into the cavern, Finn is becoming even more violent and Jake believes this to be a lack of morale, so he resumes digging for lava as Finn goes back up to fight the rest of the Gladiator Ghosts. While Jake sings about being on a tropical island, Finn soundly defeats every gladiator ghost, but the Fight King says he has one more opponent to face, and brings the dirt dummy Jake forward, which Finn savagely attacks. Jake, after realizing in song that his plan would result in death, comes back out of the hole and Finn reveals the dirt dummy to be a farce. He then turns on Jake, who runs when the seemingly bloodthirsty Finn goes after him.

When Finn has been tied up by Jake using his body, he tells the Fight King he cannot kill Jake unless he has a bigger sword. The Fight King throws his magic sword at Finn happily, telling him to finish Jake. Finn then throws the sword on the ground and shatters it, effectively killing the Fight King. Finn then reveals to Jake that this was his plan his entire time and didn't tell Jake because he always bungles his plans. Afterwards, Finn, Jake and the Gladiator Ghosts leave the arena. Finn and Jake figure out that they must have been in the same situation as Finn and Jake and had to fight their own best friends. They believe by defeating the Fight King they freed them, but as the ghosts rise into the sky the arena follows them. 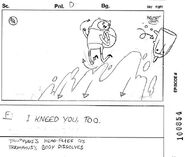 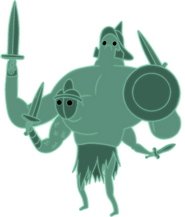 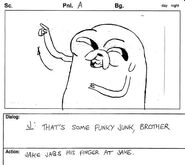 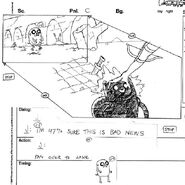 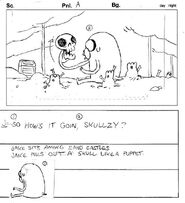 Unused line/scene.
Add a photo to this gallery 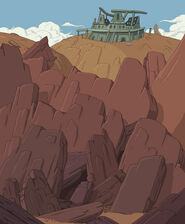 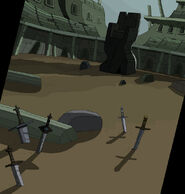 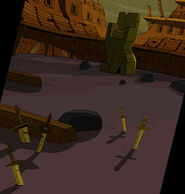 Thesnailins3e2.png
The Waving Snail (Click it to see the full view)

Retrieved from "https://adventuretime.fandom.com/wiki/Morituri_Te_Salutamus?oldid=323635"
Community content is available under CC-BY-SA unless otherwise noted.