Creator of all MOs

Chuck McCann
Moseph "Moe" Mastro Giovanni was an old man who founded MO Co. and created BMO and all the other MOs. He says that BMO was created to experience fun and to care for his son, but he never managed to start a family. When asked by Finn if he was a human, he responded that his skin is human. He could have once been a full human like Finn, but it seems that as he grew old, most of his body parts except the skin and possibly his brain were replaced by machines. In other words, he is a cyborg. But if he is a survivor of the great mushroom war it would make sense that he would need replacement body parts to prevent toxic waste from destroying his body in order to live.

Moe claims to have built millions of MOs throughout his life. As well as playing host to numerous MOs that seem to have a societal life underground in his factory, Moe also uses MOs to assist him for medical purposes, such as being carried by MMO and having other robots assisting or replacing his organs.

In "The More You Moe, The Moe You Know (Part II)," it is revealed that Moe had passed away and that before dying, he requested that his memory disk be transported into outer space.

In the series finale "Come Along With Me," BMO and ALLMO, along with Banana Man, fulfilled his dying wish, shooting a rocket with his memory disk attached into space.

He is shown to be a very old man, with an inability to move his legs, white toupee, and stretched brown skin. He wears a grey suit that covers all of his body except for his hands and head, and is living on robotic life support with robots simulating a heart and lungs. Moe's legs are emaciated and useless. Since he cannot walk, he is usually seen being carried by an MMO or dragging himself around with his arms. Moe has human skin, but over the years he has replaced some parts of his body with robots. 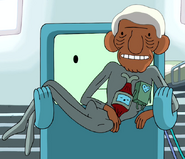 Moe being carried by MMO

Say hello to your family, BMO

Promotional comic book for the episode "The More You Moe, The Moe You Know"