"Diamonds and Lemons"
Minecraft Endermen appear in the game, "Minecraft." This Enderman makes it's Adventure Time debut in the episode, "Diamonds and Lemons." On Finn's way home, he happens to look in the eyes on an Enderman, so the Enderman charged him. Just before he attacked Finn, he stopped because Finn wasn't looking him in the eyes. After many hours on staring at the Enderman's feet, Lumpy Space Princess came along and annoyed it away. A few moments after that, Ice King steals Finn’s Pumpkin and tries to run away, but bumps into the Enderman instead, and is then chased away.

They appear to have tall, black, slender bodies, with purple eyes. They also have a large mouth that can unhinge itself when needed. He is surrounded by purple fire. 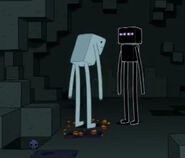