"James Baxter the Horse"
The Milk Ghost is a character who died prior to the episode "James Baxter the Horse". Some people he knew in his life attend his funeral. Finn and Jake try to cheer him up several times, angering the ghost more and more with each attempt. After their final, successful attempt, he breaks free of his prison and nearly mauls them to death. Before he delivers the finishing blow, however, James Baxter arrives and cheers him up, after which the ghost leaves Finn and Jake alone.

In life, he had light-blue skin and brown hair and wore a pink suit and tie. His skeleton wears a purple suit and red boots, and his skull is decorated like a calavera. After he leaves his body, he is an enormous ghost with large, empty eye sockets that leak milk.

The ghost as he appeared in life 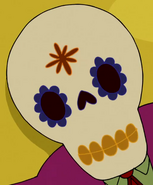 The ghost's skull
Add a photo to this gallery
Retrieved from "https://adventuretime.fandom.com/wiki/Milk_Ghost?oldid=848697"
Community content is available under CC-BY-SA unless otherwise noted.