Memory of a Memory

Memory of a Memory

Ako Castuera
Tom Herpich
"Memory of a Memory" is the third episode in the third season of Adventure Time. It's the fifty-fifth episode overall.

Finn and Jake enter Marceline's mind to awaken her from a sleep spell she had cast on herself, without knowing that they are being tricked by a person from her past.

Finn and Jake are running through a lake with an armless, rag-clothed wizard on Jake's shoulder. Jake asks Finn why he is running so hard, when the Rag Wizard claims that Marceline is in trouble, and they quicken their pace. Jake asks the wizard how he knows Marceline as they enter the cave where her house is situated, and he claims to be her "spirit animal."

When they eventually get to Marceline's house, they find Marceline unconscious on the ground. The Rag Wizard tells Finn and Jake that Marceline accidentally placed a sleep spell on herself and they must find her Memory Core or else she will sleep forever. The wizard claims that he cannot help Marceline himself because he has no arms, and going inside someone's memory can be dangerous. Then, he uses his foot to touch Finn's forehead (which he calls his "thing"), and tells him that his forehead will glow as he gets closer to the memory core. The Rag Wizard then gives them a satchel full of Sleep Powder and tells them to use it on themselves, which they do, and fall asleep almost at once, but not before being warned about the consequences of their failure.

When Finn and Jake supposedly wake up right back where they started, they find themselves in a memory of Marceline as a child in a ruinous city (Obviously after the Great Mushroom War), repairing her teddy bear, Hambo. Marceline points them to the cellar door on a house, claiming that it might lead to the memory core, as the two phrases sound similar. The duo go through the cellar door which leads to a brief memory of Marceline at her house, picking her nose and wiping it on the couch. Traveling further, Finn and Jake then find themselves in another memory where Hunson Abadeer is eating her fries and Finn whispers to him warningly, "Yo, man... Don't eat those," knowing of Marceline's "fry breakdown" in the future, leading to the "Fry Song."

Finn and Jake soon find a memory where Marceline and her boyfriend, Ash, are moving into their tree house, and Ash conjures a rose with a happy face that says sweetly, "Marcewine... I wuv... I wuv!" Marceline greatly appreciates this gesture and kisses Ash on the cheek, and he blushes deeply. Confused, Finn and Jake wander into a memory where Ash reveals he sold Marceline's beloved teddy bear Hambo to Maja for a new cherry blossom wand, then insults Marceline by conjuring a ghost from the wand that sings, "You're not a genius, you're not a genius..."

Marceline is furious at Ash for selling her most cherished possession. She is obviously furious for her cheeks are shown as slightly pink and has tears in her eyes. (This may be due to it being given to her from Simon Petrikov)  "You're a psycho jerk and you ruin my life!" Ash pleads with Marceline, but Marceline screams, "It's over, you psycho!" After this, Finn and Jake slip through a glowing crack in the floor; after playing "hot-cold" with Finn's glowing forehead, they finally find the orb of the spell.

The two wake up to find that Rag Wizard actually does have arms, and takes the physical manifestation of Marceline's memory encased in a bubble from them before they awaken fully. His job done, the Rag Wizard wakes Marceline up with an awakening spell (Which may mean that he lied about Marceline accidentally putting herself to sleep). Marceline appears fine, and when Finn and Jake tell them about what happened to her, indicating that their wizard friend helped out, Marceline states that the wizard is not her friend, but her boyfriend Ash, having no memory of their breakup whatsoever. When Marceline leaves the room Ash then reveals his plan: He used Finn and Jake to find the memory core, so he could destroy the memory of his and Marceline's break up, not the memory of a sleep spell (He was the one who put Marceline to sleep). Upon destroying the memory, Ash then takes Marceline back to his house.

Finn and Jake follow them to his house where Jake provides a distraction by banging a shovel against a shed, but the shed is actually a Tiny Goblin's house. The Tiny Goblin immediately panics, mistaking Jake for a monster. Jake realizes his mistake and tries to calm the Tiny Goblin, but the Tiny Goblin keeps screaming for help, attracting the attention of Ash, who thinks sees Jake near the Tiny Goblin and chases Jake, being on the warpath against Jake while trying to protect the little neighbor. Having effectively drawn Ash away from the house, Finn breaks in via the chimney and finds Marceline inside, who warns Finn to leave, as Ash does not like her hanging out with "mere mortals." Finn agrees to leave, but first shows Marceline some of the sleep powder still in his possession, and blows it into her face, sending her into Finn's memory. Looking through a crack in an open door, Marceline witnesses a chubby baby Finn singing a song to himself in Joshua and Margaret's house. Current Finn finds her and reveals his own memory of viewing Marceline's break up memory to her.

Disheartened at her remembrance, Marceline and Finn wake up and go outside, just as Ash emerges from the nearby woods. Ash tells Marceline not to be with Finn and orders Marceline into the kitchen to make him a turkey sandwich with tomatoes and pickles, only to be kicked in the crotch and several times in the head by Marceline, jumped on by Finn and crushed underneath Jake's giant foot.

For more information on how the scenes in this episode relate to Marceline's history, see Marceline/Analysis of Marceline's origin 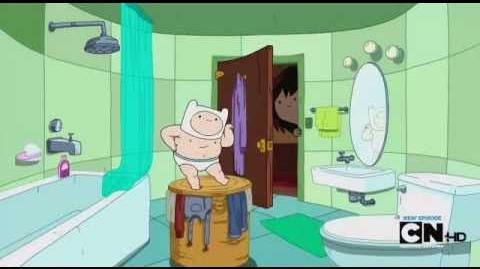 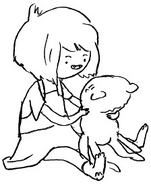