Finn tries to reconfirm his desire for helping people out when confronted with one problem after another stemming from a violence-hating mountain.

The episode begins with the Marauders fighting each other and acting rough. Finn, participating in the fight, then hears a cry for help from somewhere. Before Finn goes off to find the source of the crying, the Marauder he had been sparring with stops and insults Finn. Finn tells him a story of when he was young, he took a "boom boom" (Finn's word for defecation) on a leaf and accidentally sat in it. He cried for a day, and no one helped him, so he swore to help others who need help and goes to the mountain. Once they scale it, Finn and Jake find out that the mountain is actually a living being and crying rocks. He tells them that he is sad because of the Marauders' roughhousing and he abhors the use of violence. Jake says the mountain's got problems, which triggers some more of the "boom boom" memories. Finn is on the leaf and a bug woman tells her daughter that Finn has problems. So, Finn convinces Jake to help, and then they promise to help the mountain. They ask the Marauders to tone-down the roughhousing on their first attempt, but they say they can't make the fighting less rough. He sees a duck and rat, and gets an idea to soften them by tying animals to them, but the mountain is even more sad because the animals are getting hurt and it is worse than before. Finn then pets the Marauders to get their attention and they all seem to like it. Finn goes to tell the Mountain about the petting, he is delighted by the change and thanks Finn. The Marauders pet themselves until their skin grows raw, promoting them to go back to roughhousing despite Finn's protests. Finn then gets an idea to turn the mountain around and everyone agrees. A female mountain objects (she likes the look of the mountain's back), and then Finn gets various requests from several sources.

The requests are: Mushroom Creatures (they want to dance to music), Coal Man (he wants peace and quiet), a Cactus Creature (she needs pollination to have her babies), Dragon (he has an itchy butt), Ice Cube Creature (he is in very cold water and wants to melt), Fish (they want the flies off of their almost dead mother), a toad and Electroids (they are in a debate with each other because Little Blue Creatures took his plum and the toad stole their triangle), and Naked Wizard (he is just naked and wants to be clothed). Finn becomes stressed, nearly driven to tears by the gravity of his desperate situation to try and stay true to his pledge, and in trying to calm him down, Jake asks Finn what he wants. This triggers the last part of the "boom boom" memory. Finn is still stuck to a leaf when Joshua and Margaret pass by and see him there. The two dogs resemble Jake, for they are Jake's mother and father. Margaret kisses Finn on the cheek, which makes Finn feel better. In response, Joshua tells her that she had just kissed a "boom boom" baby and thus shouldn't expect any "sugar" from him.

Finn then gets a clever idea that solves everybody's problems in a Rube Goldberg-esque manner. The Marauders start rough-housing connecting a machine that swats the flies off the mother fish. The flies cover the Coal Man's ears, drowning out the sound. He throws two coal pieces that trigger a simple machine giving the toad his plum and the blue creatures their triangle. They hum and make the mushrooms dance in the flowers. The pollen from the flowers gets on the cactus creature making her babies. They are covered in prickles and scratch the dragon's itch. The dragon breathes fire and melts the ice cube. The Naked Wizard makes a foam hat out of the evaporating water. The mountain cannot see through the steam and is told no one is rough-housing. The female mountain is gladdened that she can still enjoy the mountain's grassy back. Finn recieves praise for solving everyones problems at once, only for Jake to tell Finn that he has a problem—a dolphin fell in love with him. Finn tells him that is the opposite of a problem. Afterward, the two of them are seen riding on the dolphin on a body of water.

The dolphin that fell in love with Jake

A Marauder with duck-roped hands

A front, side, and back view of the Marauder 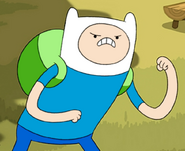 Finn wrassles with a Marauder.

A crying baby Finn, fallen into his own "boom boom"

Jake and Finn come upon an avalanche.

Two Marauders with ducks and rats roped around their hands

Happy Marauders pat one another.

Finn and a smiling Mountain Man

The Marauders pat each other raw.

The Mushroom Creatures explain their problem.

The dragon complains of his itching butt.

The Ice Cube Creature shivers in the cold water.

Joshua and Margaret find the "boom boom" of baby Finn.

Joshua and Margaret with baby Finn

The Cactus Creature and her babies

The Cactus Creature and her grown babies

The dragon's butt is scratched by the Cactus Creatures.

The Naked Wizard makes a steam hat for himself.

The whole scene, and every problem's solution

Jake explains a dolphin who is in love with him to Finn.

Finn and Jake ride the dolphin at the end of the episode.