May I Come In?

Finn, Jake, Marceline and Bonnibel are scouting the woods in search of the vampire named The Moon, following the trail of green pearls left behind by her. Finn partakes from the pearls but is told by Jake not to out of fear that they might be traps or poisonous. Marceline ensures the two that the pearls are harmless and that slaying The Moon would be an easy task. However, Jake stays worried and suggests that they should find shelter before it gets dark, ironically just as the sun finally sets. The party continues following Bonnibel's vampire detecting device. Shortly after their departure, a frightened Crunchy, clad in fur, comes running out of a bush with the King of Ooo pursuing him on horseback. The King is hunting Crunchy as he believes this to be the most regal of all other activities. As the hunt continues, The King hears a large roar from a large shrub and shoots a cotton-swab arrow towards it, believing it to be Crunchy. The creature hiding in the shrub is in actuality The Hierophant morphed into a wild boar, who then proceeds to chase after The King and Crunchy. The two of them climb a tree in an attempt to protect themselves, believing that all animals are incapable of climbing trees. Much to their horror, The Hierophant transforms into a Koala bear, climbs the tree and demands Marceline's current location from them. The King and Crunchy comply by drawing a map from the king's tunic.

Back at the cottage Peppermint Butler is tending to the stewpot at the fireplace when he hears scratching at the door leading outside of the house. Peppermint Butler opens the door and sees The Hierophant, now morphed into a puma, is standing in front of the door, ready to bite down on him, but instead asks for permission to enter the house. Peppermint Butler immediately realizes that the revenant is an old fashioned vampire that cannot enter a house unless it is invited in by one of the inhabitants, and as such, he begins ridiculing The Hierophant and throws garlic slices in his face. Unfazed by the insults or the garlic The Hierophant uses his cat-like eyesight to notice footprints leading away from the cottage and into the nearby forest and begins following the tracks. Peppermint Butler tries distracting the vampire by jumping outside of the house and calls out to him, with no success, so instead he pulls out his cell phone and texts a warning to Princess Bubblegum, warning her that the vampire is stalking them. The princess receives his text and informs the rest of the party of the incoming vampire. Marceline dismisses the possibility of the vampire being The Moon since she prefers the hide-and-seek approach. Jake, who is now the size of Finn's foot, remains scared while Finn suggests that they could be ambushed at any time. Just then a moaning is heard from a shrub behind Finn. The shrub turns out to be Lumpy Space Princess covered in leaves, who begins waking up from a satisfying nap. She asks the group if they are hunting for rabbits.

The Hierophant, still in puma form, eventually finds Finn alone in a clearing, tied by his left foot to a stake. In the close vicinity of the clearing, Bonnibel is hiding behind a tree, Jake shape-shifts into a tree, while Marceline is sitting atop a tree with Lumpy Space Princess who is covered with stakes and tied to a branch, making her a makeshift vampire trap. As the Hierophant approaches Finn's neck, ready to bite at it, Marceline propels LSP towards the vampire, but he dodges the attack by turning himself into a rat. Just as he attempts yet again to drain Finn of his blood, Hierophant is called at by Marceline who is hovering high above him in the air. The Hierophant dodges the energy blast from Bonnibel's shotgun by turning into a monster bat and pursues Marceline. He offers to make her a proposition, but Marceline punches him in the face and turns invisible. Back on the ground, Finn attempts to stake the vampire with his cross-bow, but misses because of Lumpy Space Princess who keeps throwing stakes at him in an attempt to give him ammunition. The stake instead cuts the rope suspending LSP from a tree and the Princess falls on top of Bonnibel who is carrying Peppermint Butler's restored garlic bomb. After grabbing the bomb, The Hierophant dismisses it and all their other weapons as modern idiocy and in a fit of rage transforms himself into a monstrous amalgamation of various animal parts. Jake shrinks and hides inside Bonnibel's backpack and notices Peppermint Butler's latest text message which informs the party about The Hierophant's inability to enter a house without being invited in. In an ensuing battle, The Hierophant poisons Marceline with the use of a giant scorpion stinger. After noticing Marceline's injury, Jake shape-shifts into a house and orders his friends to get inside, which they do. The Hierophant is indeed unable to enter Jake without an invitation and instead tries biting him while in wolf form, asking him as to what sort creature he is. Finn tries staking the vampire while still inside Jake, but The Hierophant avoids danger by morphing into a fly.

The Hierophant flies in front of Jake's door and morphs back to his humanoid form. He then begins speaking very quaintly to Marceline, telling her that she will never defeat the Vampire King in her current condition, pointing out that he could not even be defeated by her at the moment. Marceline opens the door and listens to him. Hierophant reveals that he hates the Vampire King just as much as she does, and wished to join forces with her in order to defeat their common enemy. He backs up his claims by pointing out that she could have previously defeated the Vampire King only because he allowed her to. (Marceline has a flashback of her battle with the Vampire King, in which he bit her neck, while knowingly getting staked.) Marceline begrudgingly considers the alliance but only and so long as Hierophant gives up drinking blood and does not attack any animal which would provide him with blood. He must only drain shades of red. Hierophant is obviously against these terms, and, as such, grabs Marceline by her neck and decides to have her killed and then drain Finn of all his blood, the way an old-fashioned vampire would do. Just then, a scared Crunchy(whose hands are tied-up with rope) comes running out of a bush and accidentally knocks the vampire inside Jake. The Hierophant is frightened, having entered a house without permission, so his body bursts into a pile of bones and his soul is immediately absorbed by Marceline. When asked by Finn what happened, Marceline responds that the vampire died by his own inability to adapt to the modern age.

Crunchy is openly happy that he killed a vampire and is interrupted by the King of Ooo, who claims to have had planned it out, despite Finn's, Jake's and Marceline's skepticism, as well as Bonnibel's ire towards him. Just then, Marceline begins feeling ill and transforms into a deformed wolf-monster before falling to the ground. The King of Ooo runs off with Crunchy, while the others tend to Marceline. Bonnibel notices the growing, green, poisonous scar on Marceline's left upper arm and begins to worry. At that moment, Jake says he is also feeling ill and immediately regurgitates the Hierophant's bones. Jake transforms back into his default form and stares at the bones.

The scene cuts to an image of the vampires where The Hierophant is crossed off in red.

May I Come In? promo by writer and storyboard artist Luke Pearson

May I Come In? promo by writer and storyboard artist Em Partridge 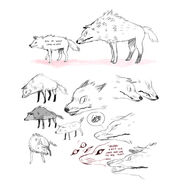 Concept sketches from May I Come In? by writer and storyboard artist Em Partridge 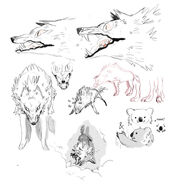 Concept sketches from May I Come In? by writer and storyboard artist Em Partridge
Add a photo to this gallery 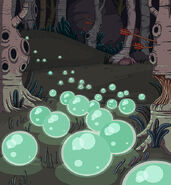 Selected backgrounds from May I Come In? by background designer Andy Ristaino
Add a photo to this gallery 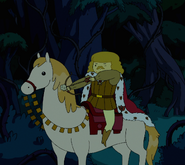 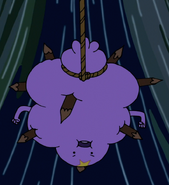 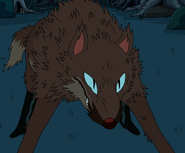 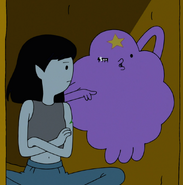 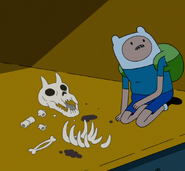 May I Come In? storyboard panel

May I Come In? storyboard panel

May I Come In? storyboard panel
Add a photo to this gallery

Retrieved from "https://adventuretime.fandom.com/wiki/May_I_Come_In%3F?oldid=823273"
Community content is available under CC-BY-SA unless otherwise noted.