watch 01:53
Episode Recap: Marcy & Hunson
Do you like this video?

Graham Falk
Adam Muto[2]
"Marcy & Hunson" is the seventh episode in the tenth season of Adventure Time. It is the two hundred and seventy-third episode overall.[3][4]

Hunson Abadeer returns to Ooo to bond with his daughter Marceline, but will he be able to prove he's changed his soul-sucking ways? [5]

Finn is needing a new sword, so he enlists the help of Peppermint Butler, who forges a weapon, the Night Blade, and then summons Hunson Abadeer (voiced by Martin Olson) to infuse it with "Nightosphere magic." Released unto Ooo, Abadeer initially tries to harvest souls, but Peppermint Butler binds him with a spell, rendering him powerless. Abadeer then decides to accompany Finn and Jake to the house of his daughter, Marceline the Vampire Queen (voiced by Olivia Olson).

Marceline is getting ready to perform at a concert for a group of ghosts at the Hamburger Hills Cemetery and is frustrated when her father randomly turns up at her doorstep. Although she tries to avoid mentioning the concert so that her father will not attend, the news is inevitably revealed and Abadeer forces his way into her concert. During a performance of Marceline's song "Slow Dance," Abadeer accidentally gets into a brawl with several ghosts. Because Abadeer is still bound by Peppermint Butler's magic, he is unable to defend himself. Finn manages to fight off the ghosts with his new sword, and then Marceline transforms into a bat, grabs her entourage, and flies away.

At the end of the episode, Marceline, Finn, Jake, and Hunson Abadeer meet up with Princess Bubblegum in a restaurant; Marceline thanks her dad for trying to support her, even if he caused a scene.

Throughout the episode, Princess Bubblegum's conniving Cousin Chicle (allied with Uncle Gumbald) disguises himself as a ghost and spies on Marceline to learn her weakness, as Gumbald has identified Marceline as one of Bubblegum's more powerful allies. 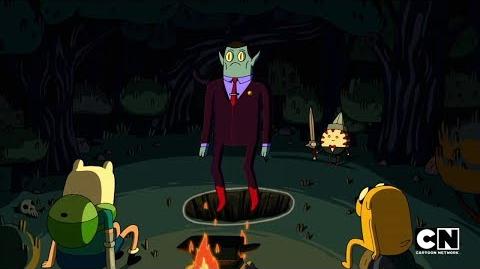 Retrieved from "https://adventuretime.fandom.com/wiki/Marcy_%26_Hunson?oldid=847087"
Community content is available under CC-BY-SA unless otherwise noted.