"Marceline The Vampire Queen" is the first part of the Adventure Time miniseries Stakes and the sixth episode in the seventh season of Adventure Time. It is the two hundred and fifth episode overall.

Finn and Jake hunt a shadowy predator and Marceline asks Princess Bubblegum for a favor.

On a sunny day, Marceline is struggling to grab her dropped umbrella while taking shelter under the shadow of a tree. She puts on sunscreen to help avoid getting burned by the sun, but the umbrella flies away with the wind as she is about to reach it.

Later in the day, Marceline barges through Bonnie's cabin with the tree over her to ask her for a favor: to carry out a procedure they had talked about in the past to undo Marceline's vampiric nature. Shocked, Bonnie says that the machines and serums to carry out the procedure are prepared and asks Marceline if she is certain that she wants to go through with it. Marceline explains that bad things happened to her in her childhood and that when she became a vampire she was just "a messed up kid." She says that even after a thousand years she still feels messed up and empty inside, and that she would rather be mortal and grow up. Bonnie has Marceline drink a black liquid and lay down in a machine and says that she cares about her and thinks she is making the right choice. Bonnie pulls a lever which activates the machine, carrying out the procedure to suck Marceline's vampire effluvium out. Afterwards, Bonnie says that she needs a few days to be certain of the results and tells Marceline to get some rest. As Marceline sleeps, she has a nightmare of her sucking a cow's blood and monstrous creatures trying to catch her. She wakes up outdoors in the middle of the night.

The scene changes to a village, where the Fat Villagers find that their cattle have had their blood sucked. They seek Finn and Jake's help, and they decide to visit Marceline out of suspicion that she did it. Jake is convinced that Marceline is the culprit, pointing out that she is the only vampire left in Ooo, but Finn says that they need to carry out a proper investigation. They visit Bonnie's cabin to speak to Marceline, who swears that she didn't do it. Finn and Jake promise that they will help sort the problem out together; however, outside the window, three Fat Villagers who have been eavesdropping on the conversation come to the assumption that Finn and Jake do Marceline's bidding, and they quickly run back to the village to tell the others. The Villagers all decide not to take any risks, and they resolve to take out Marceline.

Later at night, Marceline, Finn and Jake are out hunting to look for any beasts that could have possibly drained the Fat Villagers' cattle's blood. They quickly spot a vampiric creature biting a cow in a field. Finn and Jake chase it to its lair, a cave, and are disturbed to find many other animals blood-drained as well. Jake faints and Finn chases the creature out of the cave. He runs back to the field, only to find Marceline missing. Cloud Dance, the villagers' leader, gets Finn's attention and shows him that the villagers have tied Marceline to a windmill in order to have her burn to death when sunrise hits. Finn tells Cloud Dance that he's messed up and that he's about to burn his friend. Cloud Dance comes to his senses and realizes that the situation really is messed up and tells Finn to save Marceline before the sunlight reaches her, but Finn is too late. As the sunlight is about to hit her, Marceline screams to Finn to burn her diaries to prevent anyone from reading them as the sun's hue shines over her face, ending the episode. 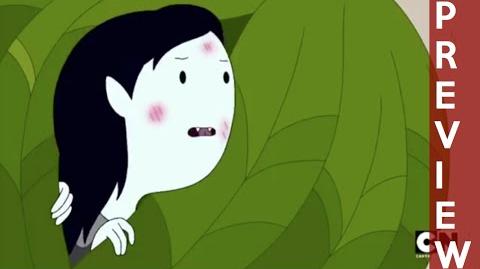 Finn doesn't get to save Marceline

Retrieved from "https://adventuretime.fandom.com/wiki/Marceline_The_Vampire_Queen?oldid=827591"
Community content is available under CC-BY-SA unless otherwise noted.