"Marceline's Closet"
Marceline's journal makes its only appearance in "Marceline's Closet." In this episode, she sings "Journal Song" as she reads from her journal. Marceline writes her songs in this book and then records them on her tape recorder.

It has a red cover on which are various miscellaneous decorations, including two daggers, a frowning cyclops' head, and a skull. The name "Gunter" is written across it in yellow writing. This is most likely because in "Simon & Marcy," Ice King (Simon Petrikov) continuously forgets her name and calls her Gunter. It has wear on the edges, smudges, and tape, suggesting that the journal is fairly old.

As Marceline makes her preliminary notes, her journal has a very different appearance. Instead of red, it is a dull maroon, and in the place of the decorations and writing are the words "Marcie's Journal." It is also bound on the left side of the cover. 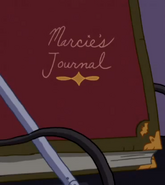