Ako Castuera
Jesse Moynihan
"Marceline's Closet" is the twenty-first episode in the third season of Adventure Time. It's the seventy-third episode overall.

Finn and Jake play Cloud Hunt in Marceline's house, but they get trapped in her closet after she comes home.

Finn and Jake head over to Marceline's house to jam with her. Finn intends to play a balloon believing they are the instruments of the future and plays The Extremities Song to prove it. They find a note on Marceline's door saying she went out and that she will be back and to not go into her house. While they wait, Finn and Jake decide to play Cloud Hunt. As Finn counts, Jake hides in Marceline's house despite being told not to. When Finn looks for Jake, he spots him through the window and tries tell him to get out. But Jake mocks him by copying his movements. Finn even tried going up close to him, but Jake continues copying him.

Finn decides to write a note saying there is an emergency at the Tree Fort so Marceline will leave and they can get away. Finn plans for the note to go down stairs, make and eat eggs, then land on Marceline's front porch. The note does everything Finn plans for it to do except instead of landing on the front porch it returns upstairs and lands in Marceline's trash can. Marceline decides Finn and Jake are not coming and begins to play her own personal music that no one else should hear (see Journal Song). As she plays, Jake says that what they have done is far too much and then he states he will find a way out. He smashes a small hole through the wall with a spoon, shrinks and tries to escape, but a white spider chases him out of the hole. Finn and Jake panic but are able to quietly push the Spider outside of the closet. The Spider then pushes a lamp off of Marceline's table, shattering it. As Finn and Jake are observing it, Marceline hisses as she draws her attention to the closet. She opens it, only to reveal she is getting a broom and dust pan, while Finn and Jake are hiding in an overcoat. As Marceline puts the broom away, dust falls on her and she goes to clean herself up. Jake coaxes Finn to check out the situation. Finn sneaks out only to witness Marceline floating towards the bathroom naked. Shocked and embarrassed, Finn quietly retreats back into the closet, refusing to go back out.

Marceline then goes to bed and Finn and Jake try to leave by quietly moving toward the exit. On their way out, the Spider falls at Finn's forehead and Finn quickly flicks it onto Jake's shoulder. The spider bites Jake, but Jake does not scream out loud. However, he does show that he is in pain. As they reach the exit, the two begin to argue about whether or not Marceline is awake and can hear them. Jake states that they are "quietly screaming" and Marceline reveals she can hear them. Finn and Jake try to hide, but to no avail. Jake changes shape to look like Finn, and Finn wears a lampshade on his head. Marceline demands an explanation, and Finn and Jake explain what happened and apologize. Marceline accepts their apology and states that she hides at their house all the time. The episode ends at the Tree Fort, with Finn and Jake paranoid that Marceline is there. Just before the credits, it is revealed that Marceline is really at their house messing with them. 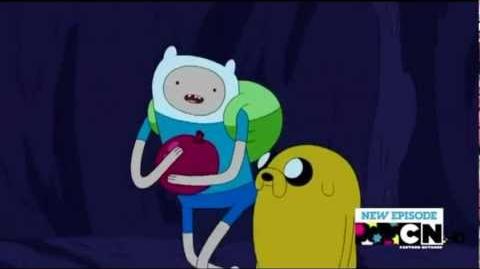 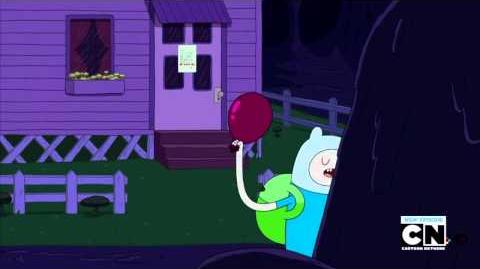 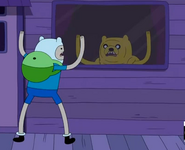