"Blenanas"
Marc is a Candy Person who appears in the episode Five Short Graybles. He is one of the participants in the Candy Kingdom Talent Show. His act is to shoot basketballs in standard penalty shot form, and he only makes two out of his 10 throws. Coincidentally, the number on his jersey is also 2. He doesn't seem to react to making or missing the basketball shots. When it came to LSP's turn, she had no act, so she ended up using the leftover basketballs. When the audience was shown, Marc could be seen in the back row.

He looks a bit like Gumdrop Lass 1, though his body is consistent pink throughout. He is about the same size as her, and is always seen wearing a light pink cavalier-type hat. In Five Short Graybles, he wears a white jersey with blue lining and a number 2 on it and wears blue basketball shorts.

In many episodes, there are Candy People that are very similar to him, with the closest resembling him having blush marks on him/her. There are two other Candy People with different shades, one being cyan, and the other being a lighter shade of cyan. 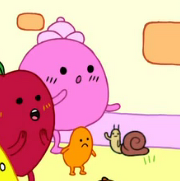 Two in "Goliad"
Add a photo to this gallery
Retrieved from "https://adventuretime.fandom.com/wiki/Marc?oldid=852102"
Community content is available under CC-BY-SA unless otherwise noted.