Fred Tatasciore
Mannish Man (or simply Mannish) is the manly and muscular minotaur appearing in Adventure Time, hence where he got his nickname "Manly Minotaur" from. He makes his first and only appearance in the episode "The Enchiridion!"

Mannish Man is a minotaur (a half-man, half-bull beast of Greek origin) and has dark orange skin that closely resembles that of a bull or an ox. He has large muscles that he can be seen constantly flexing, and two, sharp, white horns that curve inward on his head. He also has a traditional large-gauge septal piercing, something usually associated with bulls. He also carries a sword that hangs from his large belt. Mannish Man is so strong that when he flexes his arms, they flex too, forming tiny arms. (Pictured)

Mannish Man is not evil as one would expect. He is the guardian of the Enchiridion, but he is actually very friendly, joyful, and energetic. When Finn and Jake ask for the book, he simply leads them to it. He is last seen with the Key-per and two Old Ladies who disappear at the end of the episode. Princess Bubblegum gets mad at him because he told Finn not to tell her about a page in the Enchiridion. He also seems to be good friends with the Key-per. 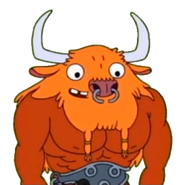 Mannish Man in "The Enchiridion!"