"Memory of a Memory"

Magic Powder is a type of powder that makes its only appearance in "Memory of a Memory." The Rag Wizard uses it to transport Finn and Jake into Marceline's Memory Core.

When Finn blows it into Marceline's face, it transports her into Finn's memory of his old house, where he shows Marceline his memory of seeing her breakup with Ash. Its effect seems like the person who uses it transports their target to their memory.

The magic powder is gold and glistens. The Rag Wizard carries it around in a small dark blue sack decorated with five-pointed stars.

Finn about to blow it in Marceline's face 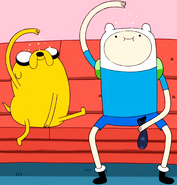 Finn and Jake sprinkling it on themselves
Español
Community content is available under CC-BY-SA unless otherwise noted.
Advertisement