Issue 75
Maggee is a moody teenager who replaced herself with a clone and ran away from her family. She appears in the Adventure Time comic issues "71", "72", "73", and "75". Technically, the Maggee seen for the majority of the 4-part comic special "Double Trouble" is the original Maggee's clone.

The original and the clone also technically appears in Issue 70 but her face is not shown and she is not named at that point.

The "original" Maggee, is a very typical moody teenager. She is seen making sarcastic remarks and laughing in the background. Her "first copy", is similar but a little more cheery in comparison. She is very compassionate, but hides this for most of the comic. This is because she doesn't want anybody to know she is a double.

She has poofy brown hair, wears a black eyemask, and wears a navy blue cloak. She can sometimes be seen with the hood up; in this case, her face is hidden in the shadows. 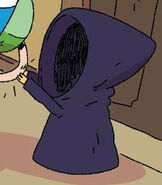 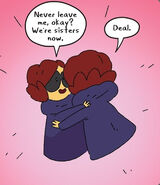