It is red and rectangular, with a blue screen and a light blue antenna. It has two black circular buttons and three darker red square buttons. In "Gotcha!," her phone is black instead of red, but it looks the same otherwise. 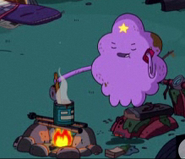 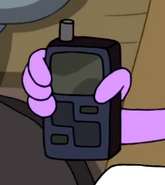 LSP's phone in "Gotcha!"
Add a photo to this gallery
Retrieved from "https://adventuretime.fandom.com/wiki/Lumpy_Space_Princess%27s_phone?oldid=811464"
Community content is available under CC-BY-SA unless otherwise noted.