"Come Along With Me"
The Lumpy Space People make their first appearance in "Trouble in Lumpy Space." They resemble small floating clouds with arms but usually no legs or feet (known exception, Brad) and are generally shades of cool colors like purple or blue and in some cases pink, violet, green and white. When the Lumpy Space People marry they become fused together, meaning that they can only get married once.[1] During their marriage, they may also have a "lump shift," which changes their positions slightly, as shown by Lumpy Space King and Lumpy Space Queen's change of appearance from their debut to "The Monster." They all have sharp fangs that can turn "non-lumpers" into "lumpies." "Non-lumpers" have their voice deepened when becoming lumpy (for example, Finn and Jake). Most lumpers live in Lumpy Space. Most, if not all Lumpy Space folk are constantly irritated and prone to mood swings as per the social interactions of Lumpy Space Princess, Melissa, Lumpy Space Queen, and Lumpy Space King (and Finn and Jake when they turn lumpy from contracting the lumps). Pendleton Ward mentioned that Lumpy Space People are made of irradiated stardust.[2] Most Lumpers have three stubs on the bottom. They all have the ability to float, albeit at a limited altitude, but LSP's gem of power seems to either give her this ability or simply indicate when it's in use. 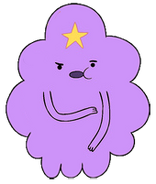 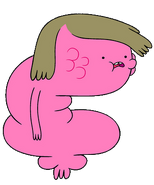 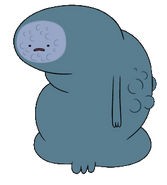 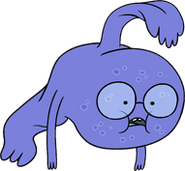 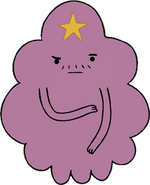 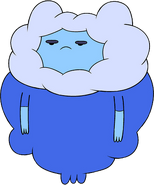 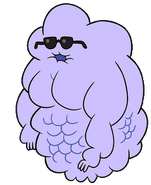 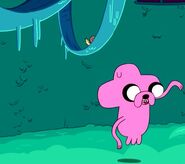 Jake as a Lumpy Space Person