She's seen to be brash in "Trouble in Lumpy Space." In "The Monster," she has a more caring, somewhat quieter personality.

Lumpy Space Queen is attached to Lumpy Space King. Like her daughter and husband, she has a star with a light pink outline on her forehead, and short, straight medium purple hair. She and her husband are both light purple like Lumpy Space Princess. In "The Monster," she has a new design where she is no longer on Lumpy Space King's back, but on his side. This is due to lump shifts.[1]

She wears a crown similar in design to Princess Bubblegum's. 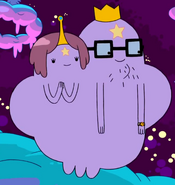