Lub Glubs [1] are creatures who appear in "Beautopia." They resemble or live inside of inflatable pool toys. The Lub Glubs took over Beautopia, the place where the Hyooman tribe used to live. They emerged from a tunnel with a sign that read "Floaty" posted above it, but the 'O' was dangling down.

They appear as harmless pool toys in cute shapes like ducks, a dolphin, a snake, a pony, and an octopus. They are actually vicious shadow beasts that prey on the Hyooman tribe, as one was seen gnawing meat from a skull that had a bunny-hat resembling Fionna's.

They remained passive until Jake, trying to convince the terrified Susan Strong that they were harmless, tried to pop one with his "pickaxe hand." They spilled and burst from their floaties in hideous pitch-black forms, grappling the heroes with spindly arms. The Lub Glubs then take their true form - amorphous pitch-black masses showing only what appear to be teeth. Though stunned by regular attacks, their only weakness seems to be light; aware of this they tried to stop Jake from lighting the massive torch known as the City Heart, and when he did they burned away leaving no trace but the torn floaty toys they were hiding in.

It is assumed that the Lub Glubs encase themselves in pool toys to disguise themselves and protect their bodies from the light, even though it was rather dark in the cavern. 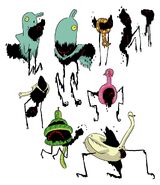 "I'm puttin' an end to all this craziness, with my pickaxe hand!" 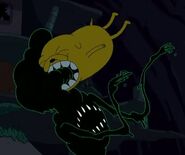 Boss Lub Glub
Add a photo to this gallery

Retrieved from "https://adventuretime.fandom.com/wiki/Lub_Glubs?oldid=335190"
Community content is available under CC-BY-SA unless otherwise noted.