Cole Sanchez
Kent Osborne
Andy Ristaino [1]
"Love Games" is the thirty-fifth episode in the fifth season of Adventure Time. It's the one hundred and thirty-ninth episode overall.

Slime Princess needs a husband or else she'll lose the Slime Kingdom to her hot and obnoxious sister. Finn steps in to save the day, but first they will need to win a series of Love Games to prove to Elder Plops that they are really in love.[2]

Finn and Jake are hosting what appears to be a talk show (with Finn claiming that he no longer wants to date anymore) when Slime Princess arrives and announces that she needs help with an emergency. Finn is eager to help until Slime Princess says that she needs Finn to marry her or else she will lose the Slime Kingdom. Finn states that he is unable to do so, and Ice King interrupts and volunteers himself as husband before Jake tells him off.

While introducing Finn as her new husband to the Slime Kingdom's citizens, Slime Princess's sister Blargetha arrives with her husband Guillermo. Claiming that Guillermo is unable to do so himself due to a severely sore throat, Blargetha challenges Finn and Slime Princess to the Trials of Glarb, a series of love games. Slime Princess objects to this; however, Elder Plops agrees, saying that whichever couple he deems to be "the most truly in love" will rule the Slime Kingdom.

The first trial is crooning, in which the contestants climb into a Slime Swan Boat and sing a song, and Elder Plops judges the winner. Finn is still troubled by his relationship issues, but Slime Princess encourages him to simply let his emotions out. They win the first challenge with Finn's song about his inability to get over Flame Princess. They lose the second challenge, however, when Finn refuses to spoon with Slime Princess, and Blargetha ties the scores. Elder Plops announces that the final trial, smooching, would be held the next day.

Later, while unsuccessfully trying to practice for the smooching trial, Finn decides to just punch Guillermo until he agrees to leave the kingdom. They arrive at Blargetha's room, and he calls for Guillermo to come out, but Blargetha angrily responds instead. Breaking into the room, they follow Blargetha down a set of stairs and find a chamber filled with Slime Tanks. Blargetha fires at them from one, but they manage to dodge and climb inside where Finn punches Guillermo, only to discover that he is actually just a blob of Slime with olives for eyes that Blargetha made. Blargetha explains it is not easy being as attractive as she is. Finn wants to send her to prison; however, Slime Princess says that Blargetha is simply disqualified. 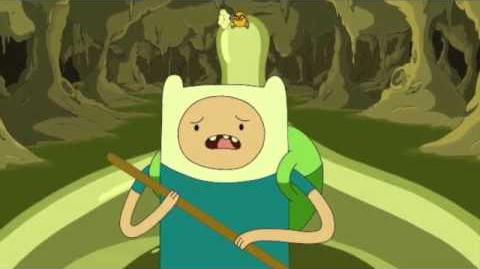 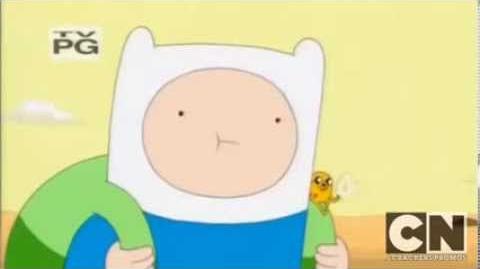 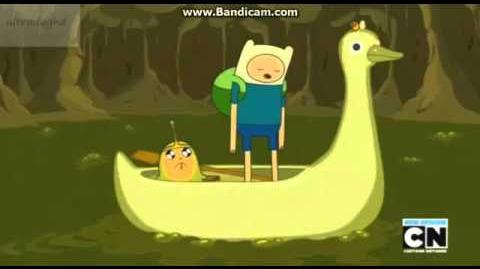 Adventure Time- I just can't get over you 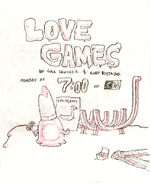 A ledge of slime

A trail of slime

Finn's reflection on the lake