Female (as Lolly)
Male (as Manfried)

Maria Bamford
Lolly (formerly known as Manfried the Talking Piñata) is a Gum Person created by Princess Bubblegum to be her and Neddy's "Aunt".

As Manfried, she is a male talking piñata who often hangs from the ceiling in the main hall of Princess Bubblegum's castle, and makes his first appearance as such in "Slumber Party Panic." He acts as an intercom system for the Candy Kingdom and seems to help out in Princess Bubblegum's castle. He is seen briefly in the episode "What Have You Done?," in which he tells Princess Bubblegum that she is needed in the castle. In the episode "Too Young," Manfried again acts as an intercom formally announcing Lemongrab's arrival at the Candy Castle by making trumpet sounds. In "Sky Witch" he appears with others as the princess's "trained elite" being taught how to overcome sleeping gas.

Unlike Uncle Gumbald, Aunt Lolly was never mentioned before the episode "Bonnibel Bubblegum," where it is revealed that she was created, along with Uncle Gumbald and Cousin Chicle, by Princess Bubblegum, eight hundred years before the events of the rest of the series. However, all of Bubblegum's intelligent relative-creations turned against her, as Lolly was in cahoots with Gumbald and his plan to overthrow their creator and build a candy city. In order to be in charge, Gumbald, Lolly, and Chicle formulated the "Happy Juice," a poison that would make Bonnie docile and simple-minded like Mr. Cream Puff. While the three were celebrating their plan, however, Lolly and Chicle were fooled into eating cupcakes made by Gumbald and dosed with Happy Juice. The poison transformed Lolly into the simple-minded piñata Manfried. Lolly remained as Manfried for the next 800 years.

In "Skyhooks II", due to Lumpy Space Princess' anti-elemental lumps reverting everything into its "true shape," Manfried has been turned back into Lolly, her previous self; however, this is not revealed until Lolly formally unveils her return to Princess Bubblegum in "Seventeen" along with Gumbald and Chicle, crashing Finn's seventeenth birthday party. She resides in Gumbald's city-state Gumbaldia, helping him rule and prepare for the Gum War against in the Candy Kingdom.

In the series finale "Come Along With Me," Finn and Jake put Princess Bubblegum and Gumbald together in a nightmare, convincing them to make peace with each other and call off the war. PB forgives Gumbald, but while the latter pretends to forgive her, his intent is to splash her with his Dum Dum Juice. Lolly, realizing this and wanting an end to the war, trips him, breaking Gumbald's hidden bottle of Juice and splashing him with it, causing him once again to turn into the Punch Bowl. Lolly then forgives her niece and calls off the war, though GOLB arrives only moments later. Lolly contributes to the fight against GOLB, leading the Gumbaldian cake soldiers. Later, she and Bonnie seem to have really reconciled, as the two are later seen bonding together, singing a lullaby to Neddy.

Manfried is a typical piñata: donkey-like form and paper-mâché body, colored horizontally with alternating strips of green and pink. Ordinarily, he remains in a single position, only moving his mouth, but he's also able to move his arms and hold a megaphone, despite the fact that he has no fingers.

As Lolly, she appears as a somewhat elderly female bubblegum humanoid with pink skin and dark pink/purple hair and is short and heavyset. She has a beehive hairdo and wears a tan tunic and brown headband.

As Manfried, he is recognizable due to his plain, seemingly emotionless voice; however, he displays a compassionate and friendly personality. Manfried is frightened easily, as shown by his exchange with Finn (below).

As Lolly, she displays a caring side to her niece/creator, seemingly enjoying spending time with her. However, she has a darker side: she appears ready to turn on Bonnibel after being manipulated by Gumbald, and even finds Chicle's cruel remark about the future princess amusing. Lolly appears to be a bit clueless as well; after witnessing Chicle eat a cupcake and transform into a candy person, she eats her own cupcake before remembering the cupcake's transformative effect. She has a plan in "Gumbaldia" to have her niece subjected to Dum Dum Juice. However, in "Come Along With Me" she seems to have become fed up with Gumbald and stops him from poisoning Bonnie with the Dum Dum Juice. Lolly calls off the war and makes amends with her niece and the Candy Kingdom. It is possible that she orchestrated the plan in "Gumbaldia" to avoid being turned back into Manfried, as her desire to avoid war seemed sincere when she mentioned it in the same episode. Especially when one notices the concerned look she had on her face right before going to war.

Manfried in "What Have You Done?" 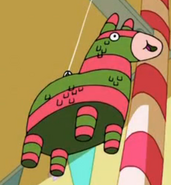 Manfried in "Too Young"

Lolly and Family After Creation